Update: NotScript is no longer available. You can use ScriptBlock or uMatrix instead. You can check out our Firefox review of uMatrix which offers identical functionality to the Chrome version. The following review is kept on the site for archiving purposes. End

Up until now it was not possible to port the popular Firefox script blocking extension NoScript to Google Chrome.

The developer of the NotScript extension for Chrome explains recent changes made to the browser that made the extension possible:

NotScripts uses a unique and novel method to provide this "NoScript" like functionality in Google Chrome that was not previously possible. It introduces a break through technique of intelligent HTML5 storage caching to over come the limitations in Google Chrome that prevented an extension like this from being made before. NotScripts blocks third-party content BEFORE they load and it does this while also having a whitelist. This is one of the key extensions that many people have been waiting for since Google Chrome came out.

The installation of the script requires the user to set a password in the Chrome profile folder, by manually editing the file CHANGE__PASSWORD__HERE.js. This may turn away many users who would probably like to use the add-on, and the developer should consider another way to set that password.

Once that is done NotScript will start to function similar to NoScript. The extension blocks most - but not all - scripts from being executed automatically on a website, with the possibility to whitelist scripts so that they can be executed normally.

It places an icon in the address bar, that displays the currently blocked and allowed scripts on the site.

Scripts that are allowed are added to a whitelist.

As mentioned previously, NotScript has several limitations at this point in development, they are:

All scripts loaded from a source location (the vast majority) can be blocked. However, inline scripts that are directly written into the HTML code of a web page cannot be blocked by NotScripts because Google Chrome does not fire load events for them.
For example: <script src="http://example.com/aScriptFile.js"> </script> can be blocked without any issues. However, <script>alert("Hello, World!"); </script> written directly into the HTML code by the site you are visiting cannot be blocked by NotScripts because it is not loaded from anywhere, it is a direct part of the web page you view. However, these inline scripts are usually useful and are often required for a site to function properly. If you want to, you can set Google Chrome to deny javascript for all sites and use NotScripts to selectively pick the scripts to run on sites you enable javascript on.

When you visit a web site for the first time with scripting enabled, you may see NotScripts quickly reload it once as it caches the whitelist and refreshes. Subsequently, there is no reloading needed unless you happen to change a part of your whitelist that directly affects the site. This is only a minor issue and happens less and less as NotScripts learns your desired whitelist.

NotScript is a unique extension for Google Chrome, that provides a good chunk of NoScript's functionality. The first official release version shows great promise, and if the developer continues to implement features and maybe, finds ways to remove some of the limitations and the dreaded password creation, then NotScript could become what NoScript is for Firefox: An indispensable add-on 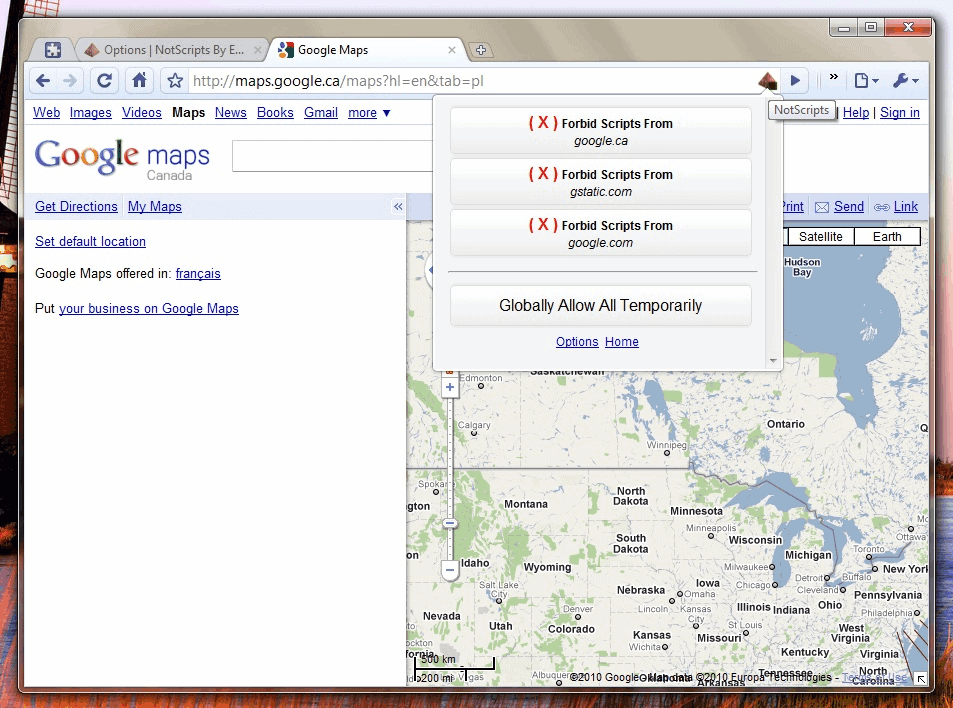