Take Back Your Privacy By Disabling Auto Suggest In IE8

The fact that Google Chrome is sending information about anything that the user types into the Google Chrome Omnibox seems to have caused quite a stir on the Internet with reports about how to disable that "feature" being posted on every blog and website that publishes Internet news.

What it basically does is to send the user input to a Google service that is analyzing it and sending suggestions back. While this could be an interesting feature for some users who love to explore new websites it also made quite a few users uncomfortable in knowing that Google would get all that user input delivered on a golden platter.

Internet Explorer 8 is making use of exactly the same feature that is automatically suggesting websites based on the previous input of the user. The suggested sites setting in Internet Explorer 8 reports the user's browsing history to Microsoft who in turn sends recommended sites back to the user. 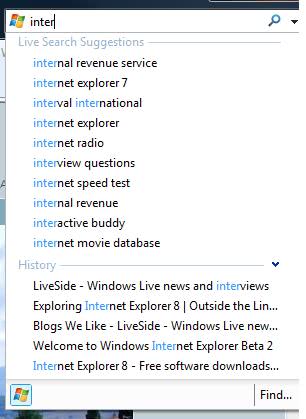 While this might be an interesting feature it will raise the same alarm bells that are still ringing from Google Chrome's data collection hunger. (Google admitted to store 2% of the data with IP addresses, no word on how Microsoft intends to use or store the data). 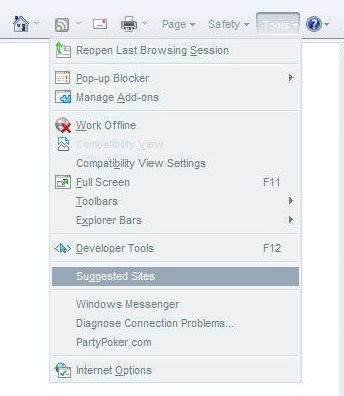 Turning that feature off in Internet Explorer 8 is fortunately as easy as turning it off In Google Chrome. Users simply have to click on Tools > Suggested Sites to turn if off (or on if it is turned off and the feature is wanted).

Update: It appears that the feature has been renamed to Bing Suggestions. It appears to be disabled by default and needs to be activated. 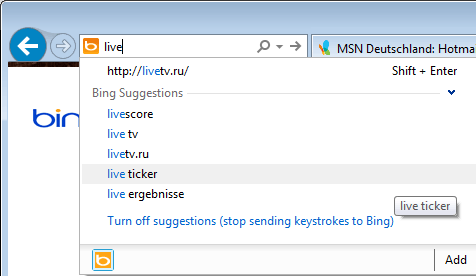 You can click on the turn on or turn off suggestions feature right in the web browser's address bar.

Martin Brinkmann is a journalist from Germany who founded Ghacks Technology News Back in 2005. He is passionate about all things tech and knows the Internet and computers like the back of his hand. You can follow Martin on Facebook or Twitter
View all posts by Martin Brinkmann →
Previous Post: « Hacker Breaks into FEMA Phone System, Makes $12,000 Worth of Calls
Next Post: Password Software »