Is your country / ISP filtering the Internet ? That's a question that not many users in the Western Hemisphere are asking themselves assuming that Internet filtering is more of a method of oppressive regimes to control the information flow in their countries. Countries like Iran, China or Syria are known to filter the Internet but it is not that widely known that other countries filter the Internet as well. Not on the same level though but in my opinion one filtered website is to much.

The Opennet website offers a form where users can enter a url and check if it is banned in a country. Not every filtered url is know and not every country of the world can be selected, I guess it would be an impossible task to keep up with every countries filtering efforts. Just take a look at Turkey and Youtube if you know what I mean, feels like they ban and unban the video portal every other day.

The main emphasize lies on countries that are known to filter the Internet heavily which amounts to a list of roughly 20 countries currently. The website offers a global Internet filtering map that displays the level of political, social, conflict / security and Internet Tools filtering for each country in the world. 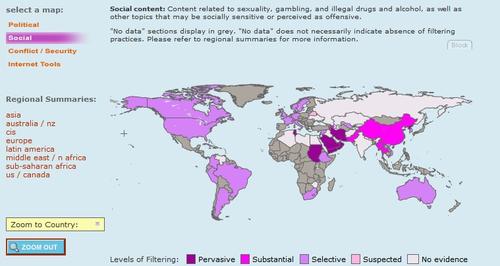 The website offers additional research which is more valuable than the two tools that I described before. Extensive country profiles are available for selected countries which give a in depths analysis of the current filtering situation in that country with lots of sources at the end of each report. It is furthermore possible to read regional overviews, articles about the subject, book recommendations and general news.

Martin Brinkmann is a journalist from Germany who founded Ghacks Technology News Back in 2005. He is passionate about all things tech and knows the Internet and computers like the back of his hand. You can follow Martin on Facebook or Twitter
View all posts by Martin Brinkmann →
Previous Post: « Imageshack introduces Torrent Downloads
Next Post: We Heart It »