In a place far away from reality - which happens to be somewhere near Seattle - two Star Wars geeks decided to create the ultimate home theater: A Star Wars Death Star Home Theater.

It took them 36 months to complete the project which in my opinion resembles the interior of an Imperial Star Destroyer and not the Death Star. Then again, it may have parts from both in it.

The home theater has actually three rooms with one being the main room that has the seats and the Stewart VeLux DeLux ST130 Screen. One of the other rooms holds the extensive media collection while the last the equipment to run the show.

The main space in the theater is approximately 22 feet from the back wall to the screen. Features inside include three levels of seats, a stage for the screen, and Wertzâ€™s favorite feature, a fiber-optic starfield. (â€œItâ€™s kind of calming, he says.) However, for most spectators, that might pale in comparison to the roomâ€™s special effects, which includes the Han Solo, a life-size C-3PO and Boba Fett. 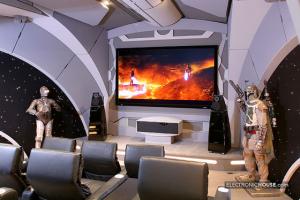 There is enough room for ten or so people at any time which means that even large families can sit together in the home cinema to watch some movies together. 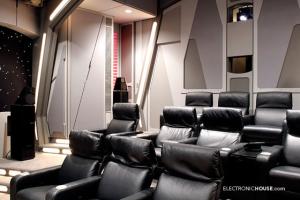 The theater is ideal for Star Wars movies, but I'd figure that some of the life size statues in the room may be quite the distraction if you watch other movies here. Think about it, you are watching a horror movie and all is dark, and suddenly you see these life size statues after a dark scene. 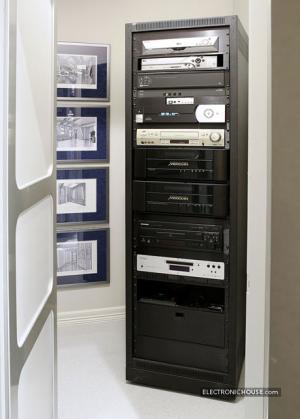 The Death Star theater was not cheap, that is for sure, especially if you look at the equipment list used to create the theater.