It can be really problematic if you want to move or copy files in Microsoft's Windows Explorer. The default Windows file manager displays only one folder at a time in the window so that it is usually the best course of action to open two Windows Explorer windows and display them side by side to improve the move and copy processes on the system.

The software Folder Box is a Windows Explorer upgrade which adds another window to the file manager so that you can run file operations like copying or moving files more comfortable using the two panes that are displayed in the file manager.

This makes it very easy to transfer files from one folder to another or to perform other file operations that require two folders.

Both panes behave just like the original pane in Windows Explorer. you can browse folders, open files, and use various drag and drop operations to interact between both panes.

It is possible to add up to five tabs to the second explorer window which lead to certain paths on your system. You can for instance create tabs to quickly access the desktop with all of its files, a network drive or a removable drive. 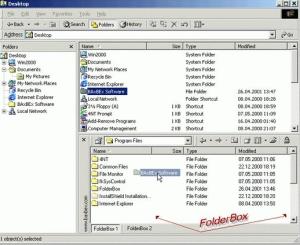 Folder Box is a free software which has to be enabled by clicking on View > Explorer Bar and selecting Folder Bar from the menu.

Update: A commercial version, called FolderBox Pro is available as well for $15 now. For that, you get double the amount of boxes that are displayed in tabs in the interface, may use the application in commercial environments, and get a button to turn the feature on and off quickly.

The program appears to be incompatible with recent versions of Windows. Installation on a 64-bit version of Windows 7 completed successfully, but there was no option to activate the second explorer pane afterwards.

You can use alternatives such as Q-Dir instead which displays multiple Explorer panes as well at the same time to improve file operations on the system.

Previous Post: « Pimp up the Vista startmenu
Next Post: « Use WinSCP to securely copy files between two computers