WordPress 3.6 released: find out what is new

Ghacks runs on WordPress and whenever a new version comes along, I make sure I write a quick post about the major changes and improvements in that version as I know that several of the site's readers are also running WordPress blogs.

WordPress 3.6 was pushed to the public yesterday after having been available as beta and release candidate versions for a while. The WordPress team calls it an enhancement and bug-fix release so that it is less likely that you will run into any issues updating your blog to version 3.6.

The new WordPress ships with the Twenty Thirteen theme, the new default theme that is updated every year. It is not replacing the Twenty Twelve or Twenty Eleven themes though, so if you are using those you can continue doing so without any issues.

The theme uses a single column layout with the sidebar moved to the footer area of the site. Other features that it supports are font-based icons and support for all the latest theme features.

Here is a glimpse of what the theme looks like. 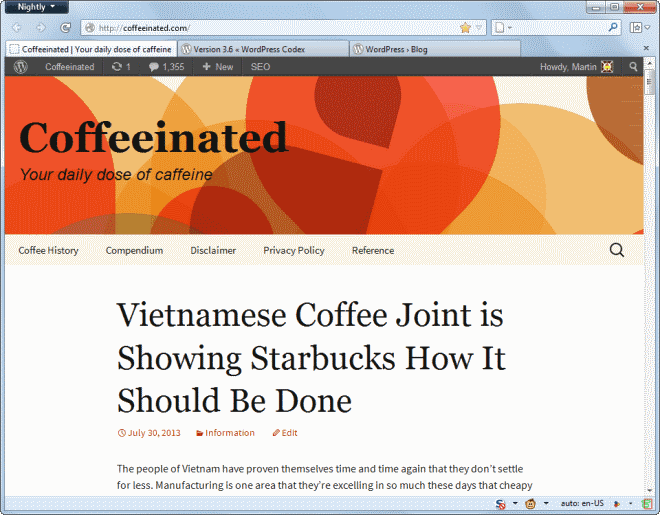 The post revision feature has been improved in several ways. These auto-saves are quite useful in situations where you leave the editor without saving, for instance when the browser crashes or hangs, or when you just forget to do so and ignore the warning message.

I encountered numerous situations in the past where a browser freeze would remove some of the text that I had written, which is an extremely frustrating experience.

The new revisions promise to save every change and ship with a new interface that makes comparison of two revisions a breeze.

If you are running a multi-author blog, then you may find the new post locking and augmented autosave features useful. This removes issues when more than one author are working on a single blog post a the same time. Each author has its own autosave stream now so that they do not collide anymore. These information are stored locally, but also remotely so that it is less likely that modifications will get lost.

Another major change is the built-in HTML5 media player that you can use to embed HTML5 audio or video contents into posts without reliance on plugins or any other third party tools or services. The developers in addition to that added oEmbed support for Rdio and Spotify which basically enables you to post an url directly to your blog which will get turned into an embed automatically. You find all sites currently supported here.

Video and audio contents can now also be previewed on the media edit screen.

Those are just some of the highlights of WordPress 3.6 Here is a quick list of other changes of note. For a full list, check out the 3.6 Codex entry on WordPress.

The reworked post revision system and post locking system is definitely a step in the right direction as it will be useful for a lot of WordPress users. The other changes depend a lot on what you use the blog for. If you do post media contents regularly to it, you benefit from the new HTML5 media player, additional oEmbed supports, media metadata support and other features.

I have updated six blogs so far and did not run into any issues whatsoever. That does not mean that you won't, so make sure you test the update before you install it on a live system.

Martin Brinkmann is a journalist from Germany who founded Ghacks Technology News Back in 2005. He is passionate about all things tech and knows the Internet and computers like the back of his hand. You can follow Martin on Facebook or Twitter
View all posts by Martin Brinkmann →
Previous Post: « A look at Firefox's new Network Monitor
Next Post: Social Media Feather: a super lightweight WordPress sharing plugin »