Why you may have lost access to plugins or extensions in Firefox 21 - gHacks Tech News
ghacks.net

I try to run my version of Firefox without plugins for two core reasons: security and stability. It makes no sense to run plugins that you never plan to use and even those that you do regularly may pose security risks. So, instead of running Flash all the time, I only activate it when I need to access contents that require it. Sure, that is more work on my part but also safer at the same time. Most Firefox users use plugins on the other hand, with Flash probably being the most used of them all.

If you have upgraded your Firefox browser to Firefox 21, the version that got released yesterday, you may have noticed that plugins or extensions that were formerly usable in the browser were not anymore after the upgrade.

While you may not even mind that, depending on the plugins or extensions that disappeared, some of you may have noticed that they could not make use of functionality on specific websites or the browser anymore due to the change.

So what happened during the update that caused this?

You may remember that Mozilla is working on a Metro-style version of Firefox for Windows 8. This implementation made it necessary to split the platform and app resources so that they can be loaded separately. The new directory structure is a direct response to that.

The following folder locations have changed in Firefox 21:

The same is true for plugins. Plugins can be saved into the plugins folder of the Firefox program folder. If you have plugins in the folder, they are no longer recognized by the browser until you move them into the browser/plugins folder. 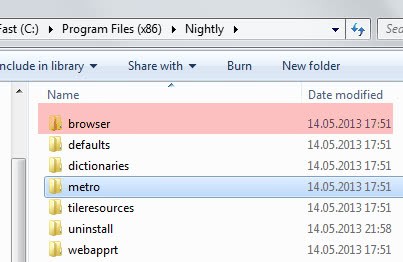 Sören notes that there is a second option that Firefox users have. Mozilla has integrated a new parameter into the browser that checks the root Firefox directory for plugins as well when enabled.

A value of true indicates that the root folder will be scanned, false that it won't. It is preferred though to move the plugins into the new folder instead.

Additional information about why platform and app resources had to be split are available on Bugzilla.