How to add another language to Windows 8

Press the shortcut Windows-W to open the Settings search option regardless where you are right now. Enter language here to display all settings related to language and select Add a language from the available options. You can alternatively press Windows-i while on the desktop, select Control Panel, and there Add a language under Clock, Language, and Region. The menu that opens up displays the languages and associated keyboard layouts that are currently installed on the Windows 8 system. 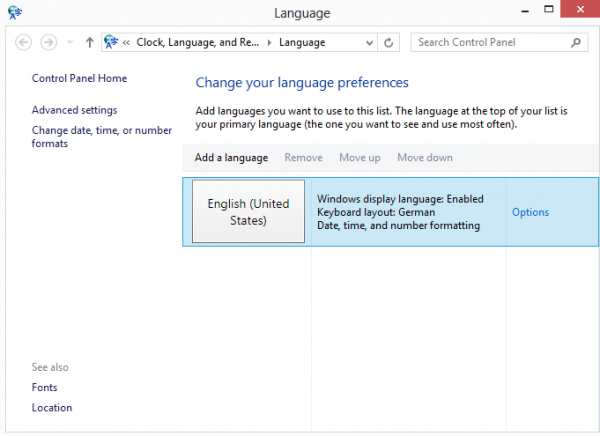 Click on the Add a language link here to install another language on the system. Doing so displays a list of all interface languages the Windows 8 operating system ships in. The listing is sorted by language name by default, which you can change to the writing system instead using the menu at the top. You may notice that some languages may have certain dialects associated with them. For German for instance you can pick between five different dialects while there are 15 available for English. 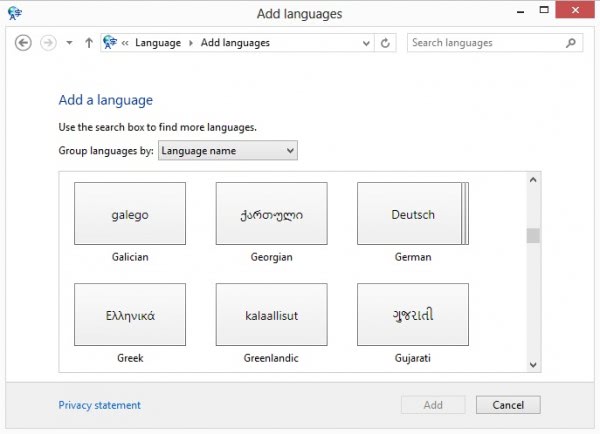 You can only select to add one language at a time, but since it does not take long to add each language to Windows, that should not be that much of an issue. In fact, the language gets added right away to the list of available languages. That does not mean that they have been downloaded to the system yet. To do that, double-click on the language and select the "download and install language pack" from the page that opens up.

When you click on the link to download the language pack you see an UAC prompt that you need to accept before the language pack can be downloaded. The download took less than a minute on a fast Internet line. After the update, you should see the available status next to the new display language that you have just installed. To make the new language the new primary language click on options next to the language and select make this the primary language from the options here. You can also remove languages as again from the same menu in case you no longer need it installed on the system.

You can alternatively click on the Advanced Settings button to change the primary language and default input method and make other modifications like setting different input methods for each app window or using the language bar when available.

The ability to add interface languages to all versions of Windows 8 is definitely something that users who rely on multiple languages will welcome. (via)