Third party software developers who want their programs to function properly under Microsoft's upcoming operating system Windows 8 need to focus their attention on two new areas. The start page is the first and without doubt the most difficulty to work with as it is restricting apps significantly that run here. The second area is touch, which is one of the improved features of Windows 8, and if you take the hardware announcements of this year's IFA as an indicator, one of the main focuses of hardware manufacturers when it comes to Windows 8 powered devices.

Browser developers like Mozilla or Google have already started their work on a version of their browser for the operating system's modern user interface, formerly known as Metro. Opera Software on the other hand kept quite until now, which may be attributed to the much smaller nature of the company, different priorities, or both.

The company has released a new snapshot of its upcoming Opera 12.50 web browser today, and one of the new features that it adds to the table is better support for touch-based devices running on Windows 7 or Windows 8. The changelog lists four touch-specific features that the company has integrated into the snapshot.

The initial improvements are for the classic version of Opera, as opposed to the modern ui version of it. Opera users that use touch-capable devices can use the newest build to scroll and move web pages and elements in Opera using touch, including touch zoom and inertial scrolling. 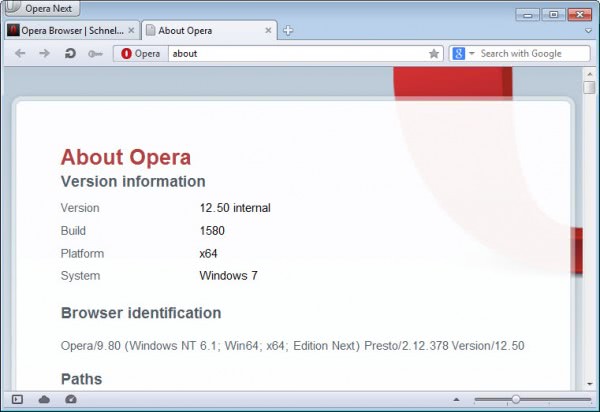 Opera 12.50 is only available as a development build right now, and while that may not be an issue at all, you may experience issues such as crashes, freezes and maybe even data loss as a consequence. It is therefor recommended to backup the operating system and browser before you install the new version.

Interested users can download the latest Opera snapshot build from the Opera Desktop Team blog website. What's interesting in this regard is that Opera seems to - at least - think about creating an Opera app for the start page of Windows 8.