Windows Store, Too Metroesque For The Desktop?

Microsoft revealed additional information about the Windows Store that the company plans to integrate into the Windows 8 operating system yesterday.

When I first saw the store landing page screenshot, it immediately reminded me of the Chrome Web Store turned by 90°. The store consists of a horizontally scrolling page that lists spotlight apps and app categories next to each other.

Touch screen users can scroll with a flick of their finger, while mouse and keyboard users do not have that luxury. They need to use their input devices to scroll the page horizontally, something that should feel awkward to many considering that this is not a common activity on the desktop. 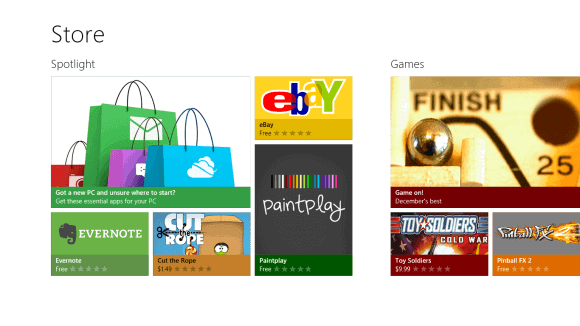 The store has been integrated into Metro UI, which means that many of the user interface controls are working in the store as well. Users can tap on the search charm to run a search or zoom out of the page with the pinch gesture. And while those actions will surely be accessible via shortcuts on the desktop, it is likely that the operations will not be as fluid as on touch screen devices.

Pinching, flicking and tapping, that's what gets you the best results in the store and Metro UI. But the majority of Windows users are not using touch based devices, and chance is that the majority won't in the coming years.

It is not really clear why the company decided to go down that route, other than trying to increase their market share in the tablet and touch device market. It feels like an all or nothing move, with no turning back.

Is no one at the company wondering if Windows 8 could alienate a large part of the company's existing user base?

The concentration on apps, and the exclusion of desktop applications, is another aspect that weights heavily here. While it would have certainly be more complicated to build a Windows store that included desktop apps, it would have been much more rewarding from a user perspective and certainly also from Microsoft's perspective.

Microsoft has released a video that demonstrates the user experience

It is interesting to note that the video only showcases touch based navigation in the store, and not keyboard or mouse navigation.

The Windows 8 Beta will surely shed more light on a desktop user's user experience. It will be interesting to see if Microsoft has improved the developer preview's experience, or if it has remained more or less the same.

What's your take on the Windows store and Windows 8?

Martin Brinkmann is a journalist from Germany who founded Ghacks Technology News Back in 2005. He is passionate about all things tech and knows the Internet and computers like the back of his hand. You can follow Martin on Facebook or Twitter
View all posts by Martin Brinkmann →
Previous Post: « How To control Non-Active Windows With The Mouse
Next Post: Using Windows "Safe Boot" To Diagnose and Repair Problems »