It is sometimes not possible to load Excel or Word documents into Microsoft Office or alternative Office programs due to corruption. The only options available at this point is to open them in a plain text editor or program that is specialized to recover the data contained in these documents.

Damaged Docx 2 Txt and Corrupt Xlsx 2 Csv are two portable software programs for the Windows operating system that can recover data from corrupt Microsoft Excel 2007 and Microsoft Word 2007 documents. The programs require the Microsoft .net Framework 2.0. Both programs have been developed by the same software developer and work therefor similar. The user has to load a Microsoft Excel or Microsoft Word document into the program in the first step. This can take a while depending on the size and complexity of the document.

All accessible worksheets or pages will be displayed in the program's interface after the document has been analyzed by the software program. 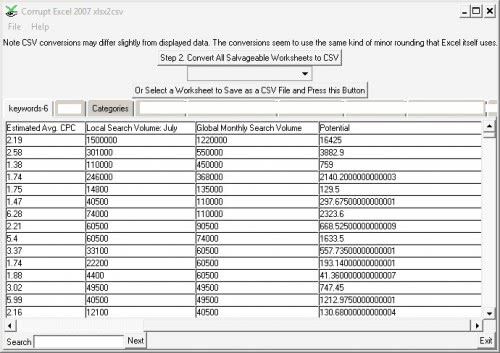 The data of one or all Excel worksheets can then be exported into a Csv file. A similar process is applied to Word documents which can be exported into the Txt format. Both programs only work with the Office 2007 Word and Excel formats and not the former standard formats. They can be downloaded from the developer's website.