The company will align release schedules for future Windows and Office 365 ProPlus releases, and targets March and September of each year for those releases.

What's particularly interesting about that from a Windows 10 users perspective is that Microsoft targets September 2017 for the next Windows 10 feature update, codename Redstone 3.

Windows is committing to a predictable twice-per-year feature release schedule, targeting September and March of each year, aligning with Office 365 ProPlus. The next Windows 10 feature update will be targeted for September 2017.

Microsoft has yet to reveal the focus of the upcoming feature update for Windows 10. The three previous feature updates, November Update, Anniversary Update and Creators Update, added much needed functionality to the operating system such as support for extensions in Microsoft Edge, Bash shell, Windows Ink, and a lot more. 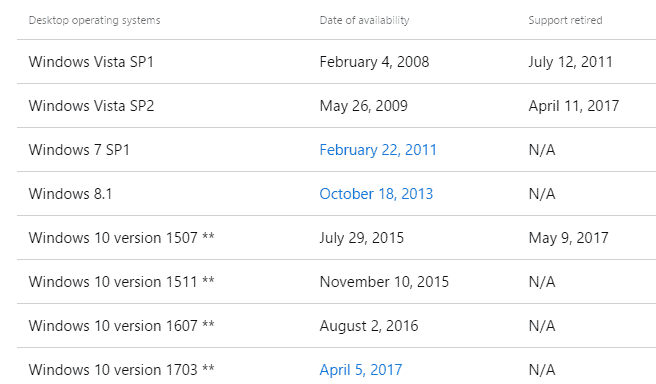 Another interesting tidbit that was revealed today on the Windows for Business blog was that Microsoft plans to service and support each Windows 10 feature release for 18 months. This falls in line with the company's current stance on supporting the different Windows 10 versions.

Each Windows 10 feature release will be serviced and supported for 18 months. This is consistent with our current Windows 10 approach, but adds further clarity and predictability to organizations by aligning with Office 365 ProPlus.

A grace period starts for the oldest feature update that is still supported then. Next up in line is the November Update which Microsoft will end support for in October 2017.

Two feature updates per year put a lot of strain on IT departments. One option that is available is to skip every other release to buy more time for testing and deployment. Enterprise customers may select the Long Term Servicing Branch version of Windows 10 instead, as it is supported for a longer period of time, but most smaller businesses and even home users may not want to pay the premium for that edition, if it is available to them at all, that is.

Now You: What's your opinion on the pace of feature update releases for Windows 10?

Martin Brinkmann is a journalist from Germany who founded Ghacks Technology News Back in 2005. He is passionate about all things tech and knows the Internet and computers like the back of his hand. You can follow Martin on Facebook or Twitter
View all posts by Martin Brinkmann →
Previous Post: « Find out if your Windows PC supports Miracast
Next Post: What would you like to see in the Windows 10 September 2017 feature update? »