Why You Should Install Internet Explorer 9

When you compare Internet Explorer 9 to its predecessors you notice that it is superior in almost every way. IE9 is a lot faster when rendering web pages, executing JavaScript and displaying multimedia contents thanks to the browser's built-in hardware acceleration; And Internet Explorer 9 offers better security against web attacks and other malicious attack forms on today's Internet.

Internet Explorer 9 is only available for Vista and Windows 7, which limits its reach , at least for the next years. And that will be the time when Internet Explorer 10 will make an appearance as part of the Windows 8 operating system, if rumors can be trusted on the matter. 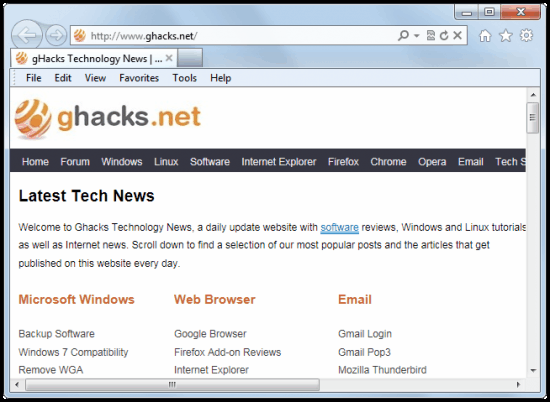 But why should you install Internet Explorer 9 if you are using a different web browser as your main browser? There is certainly no need to do that, right?

Many Windows applications use the rendering engine to display web contents. They usually do not reveal those information to the user directly, but if you look at the system requirements you often see Internet Explorer listed on the page.

Take Quicken 2011 Deluxe for instance; If you look at the system requirements page [here] you see that it requires Internet Explorer 6 or later.

There are obviously some situations where you should not upgrade. The core reasons are incompatibilities. Say you are running applications native to a specific version of Internet Explorer, or you have tried IE9 and found out that it crashes the software program that worked fine under Internet Explorer 8 (like a Ghacks reader who tried the Quicken Deluxe 2011 and IE9 combination only to find out that the app crashed on him, so he decided to uninstall Internet Explorer 9 to go back to IE8).

To summarize what has been said in one sentence: It is beneficial to update to Internet Explorer 9, unless you know of or experience application incompatibilities or other issues. Check out our Internet Explorer 9 guide for all the information you may need, including compatibility issues and download locations.

Have you made the switch to Internet Explorer 9 yet? What's your impression so far?