Internet Explorer 9 Launch, All The Information You Need

Microsoft launched the final version of Internet Explorer 9 on March 14, 2011 at 9PM Pacific Time. This guide provides you with all the information needed about the launch and the new version of the default system browser of Windows.

The minimum system requirements are 512 Megabytes of RAM, a computer with a 1 Gigahertz processor and 70 to 200 Megabytes of hard drive space depending on the version used.

Windows users who want to upgrade to Internet Explorer 9 should update the operating system via Windows Update, and the graphics card driver as well to make sure the system is best prepared for the browser.

Lets take a look at some of the core improvements over previous Internet Explorer versions.

Most noticeable is probably the improved performance of the web browser. Web pages load faster which can be attributed to improvements to the rendering engine. The speed gain is noticeable when loading websites, playing games or other media in the browser. Basically, any high taxing task benefits from performance improvements.

Microsoft has added full hardware acceleration to IE9 which improves rendering of advanced graphics and effects. While it may or may not be the fastest browser, it is a fact that Microsoft has pushed the limits and has moved the performance of Internet Explorer 9 near that of other fast web browsers.

Microsoft has changed the design of the browser which uses less space at the top. Tabs have been moved next to the address bar by default, with options to move them to their own bar below the address bar if needed. 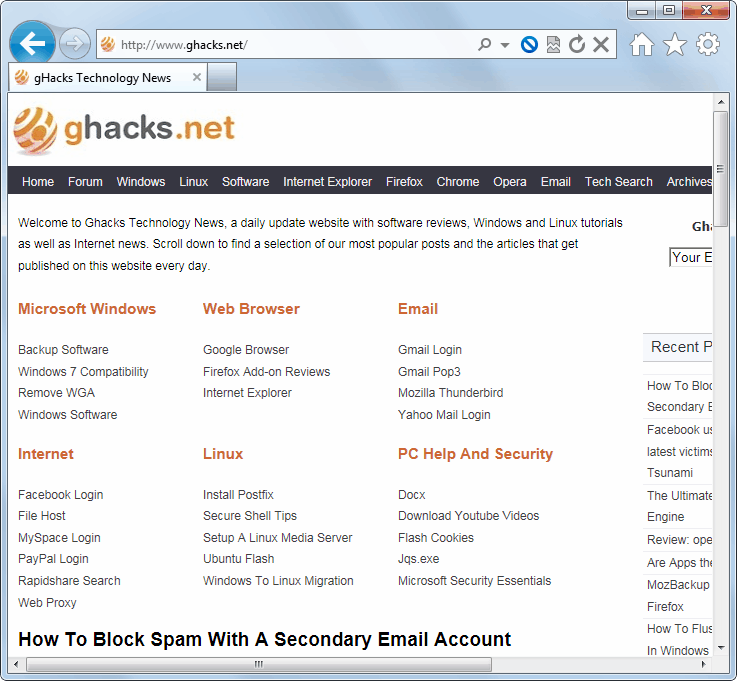 New security and privacy related features have been added to the Internet browser. Tracking Protection can be used to block tracking cookies and advertisements by loading third party lists or creating custom lists. ActiveX Filtering prevents the execution of specific scripts or functions on a website. Both new features are accessible via Tools > Safety in the menu. (check out Internet Explorer 9 ActiveX Filtering: Fix Flash, Java And Other Plugins if you cannot play Flash videos and games if you have enabled ActiveX Filtering in the browser, and Internet Explorer Tracking Protection Lists to evaluate protection lists before you install them)

Additional new features include an improved download manager, the ability to pin websites to the Windows 7 Taskbar, enhanced tabs, a new blank tab page, the notification bar that alerts the user, search that has been moved to the address bar and the add-on performance advisor.

A full list of what's new features is available at the official Internet Explorer 9 website. I'd also recommend you check out the release notes which list compatibility issues and other issues.

Internet Explorer 9 has a few usability issues. The menu bar is not shown by default, and it is only possible to display it by pressing the Alt key. There is however no direct option to enable it permanently. Users who want to do that need to add an entry to the Windows Registry.

Open the Registry with Windows-r, type regedit, and hit enter.

Navigate to the key

Some users may need to create the key Internet Explorer. This is done with a right-click on Microsoft and the selection of New > Key.

Restart Internet Explorer 9 and press Alt once. The menu bar is shown and it will be permanently available from that moment on. While we are at it. If you would like to see the menu bar above all user interface elements but the title do the following:

The final Registry tweak increases the concurrent connections of Internet Explorer 9 which can speed up the website access noticeably.

Go to the key

Look for the subkey

double-click the value explorer.exe and set it to a. This sets the number of simultenous downloads of Internet Explorer to 10.

You may need to create the keys if they do not exist.

Internet Explorer 9 has been officially released. Interested users can download the web browser from the Beauty of the Web website. It is not yet listed under Windows Update but will become available there as well.

Vista and Windows 7 users should generally update their version of Internet Explorer to Internet Explorer 9. The browser has improved in security, privacy and speed. Even if IE is not the default browser, it may be beneficial since several third party products make use of the rendering engine.

Some users, those who run apps specifically designed for a previous IE version may want to run tests before they upgrade the browser. These users should download the IE9 Blocker Toolkit to prevent the installation via Windows Update.

Check out my Internet Explorer 9 tops and flops.

Other Internet Explorer news and tips

Get More Space For Tabs In Internet Explorer 9

IE9 decimates other browsers for socially-engineered malware protection in report

Article Name
Internet Explorer 9 Launch, All The Information You Need
Description
Microsoft is preparing to launch the final version of Internet Explorer 9 today at 9PM Pacific Time. This guide gives you all the information that you need to be prepared for the launch.
Author
Martin Brinkmann
Publisher
Ghacks Technology News
Logo

Martin Brinkmann is a journalist from Germany who founded Ghacks Technology News Back in 2005. He is passionate about all things tech and knows the Internet and computers like the back of his hand. You can follow Martin on Facebook or Twitter
View all posts by Martin Brinkmann →
Previous Post: « Bookmarklets For Annoyances On The Internet
Next Post: How To Fix Internet Explorer Did Not Finish Installing Error »