Most users probably start installing the lists right away without taking a closer look at them first. To be honest, I did the same the first time I discovered the list.

That however was a huge mistake as it turned out that not all lists are doing what they are supposed to be doing. You see, protection lists can not only block elements but also allow them.

The lists use a plain text format. Internet Explorer 9 users can take a look at their contents by going to tools > safety > Tracking Protection. A right-click on installed lists and the selection of More Information opens the list of scripts that are blocked or allowed. 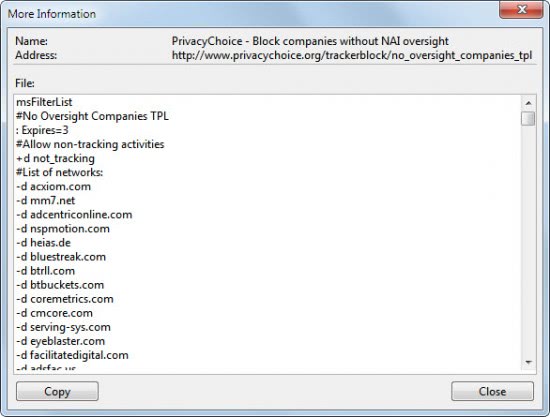 As you can see from the sample above, the syntax is -d for blocking a domain and +d for allowing it. Ed Bott over at ZDnet discovered a puzzling discrepancy.

The TRUSTe protection list does not block a single domain. It instead whitelists nearly 4000 domains so that they ads and contents are still able to track users and display advertisements to them. Even worse, the allow parameter has a higher priority than the block parameter which means that those sites are not affected if they are blocked by other lists. Among the domains are Facebook, Microsoft domains, Yahoo, Zonealarm and other high profile website.

TRUSTe mentions on their website that the list has been designed " to block companies that offer poor privacy protection, while ensuring that trustworthy companies who protect their privacy can continue to provide them with a richer, more personalized browsing experience". For now, it is all about allowing companies and not about blocking. This might change in the future. For now it is safe to say that privacy conscious users should stay away from that list.

There does not seem to be a way to check the lists before they are installed in Internet Explorer 9. Some providers offer direct links to their lists on their web pages while others do not. That leaves users with the option to verify lists manually whenever they are added to the web browser.

The lists need to be checked regularly as well as they are automatically updated by the Internet Explorer browser. It is theoretically possible to offer a clean blocking list in the beginning to add allowed sites or remove blocked sites in a later update. It is not clear yet how updates process.