While Internet Explorer has been on the web for ages, support for the browser won’t available for much longer. Until then, we’ll showcase the latest news and updates you should know, while we’ll also provide some helpful guidelines on any issues.

HTTP Watch is a HTTP monitoring plugin for Microsoft Internet Explorer that can give you detailed information about a website or application that is loaded in the browser. The main reasons for […] I received an email today from a user who was asking me how to download the latest version of Internet Explorer. I was a bit puzzled by that request but decided to […]

Internet Explorer's Content Advisor works as a safeguard and web filter so that family members might not open websites that are not suited for them. The Content Advisor is pretty much a […]

Each browser is limited cookies in two ways. The first is a per domain cookie limit that allows a single domain to only store x cookies before the oldest gets erased to […]

Microsoft introduced a phishing filter in Internet Explorer 7 which checks every website the user visits with a remote database to prevent that phishing websites get accessed. Phishing websites are fake websites […]

The IE7 Tweak Utility is a portable software program that allows you to change a few settings in Internet Explorer 7 that cannot be changed directly in the browser. I assume they […]

Internet Explorer users are a bit at the bottom of the food chain when it comes to useful add-ons for their browser. Sure, there is IE7 Pro which is a fantastic add-on […]

Collaboration is one of the big buzz words these days on the Internet. In its most basic form it means users that create content together which would include most of the so […]

MakoButton is a small application that can create buttons for Internet Explorer that launch external applications or URLs when you click on them. While the second option is not that useful in […]

That's a rather odd question, don't you think? I was always under the impression that browsers had to render websites correctly by being web standards compatible and not the other way round. […]

HD View is a new technology that is developed by Microsoft Research that aids in the display and interaction with large images with sizes of one or more Gigapixels. I was very […]

Microsoft released the first public beta of their upcoming flagship browser Internet Explorer 8 to the public and I would like to use this article - and the comments - to get some opinions about it. I know that a lot of you must have installed the new browser by now and surely must have something to say about this first version.

2008 will be an interesting year Browser wise

Add Find as you type to Internet Explorer

Runonce Setup Running all the time in IE?

Microsoft thought it would be nice to present a configuration screen to users who have installed or upgraded to Internet Explorer 7. The user can change the default search provider in this initial setup or pick some additional plugins. This runonce page is not really needed in my opinion because all the changes can be made directly in the options as well.

Tiny text that can't be changed. Background textures that hurt your eyes. A font color with a low contrast to the background color, e.g. dark blue font on dark background. I guess we all have experienced websites that had a design like this, always thought it was there to hurt the visitor because I could not think of any other reason why someone would do things like that.

Microsoft must be desperate. That was my first thought when I read that Microsoft made the decision to remove the Windows Genuine Advantage validation check from the download and installation of Internet Explorer 7. I was not able to come up with any other explanation why they decided to turn around 180 degrees and head for the other direction.

Microsoft tries to compete with its Windows Marketplace against the addon dominance of Firefox. The main difference between addons that you find at the Marketplace and those that you find at the Mozilla website is that some Marketplace addons are not free. This articles concentrates only on free addons for Internet Explorer 7. I try to point out similar addons that are available for Firefox to make this article useful for Firefox users as well. I do use both on different computers by the way.

Most of the addons that can be downloaded from the Windows Marketplace for Internet Explorer are actually toolbars. I would estimate that about 50% of all addons are toolbars.

Most of the addons that can be downloaded from the Windows Marketplace for Internet Explorer are actually toolbars. I would estimate that about 50% of all addons are toolbars.

Internet Explorer comes equipped with the same technique as firefox that allows users to create addons and offer them for download on a site that was specially created for this purpose by Microsoft. Ieaddons is the name of the site and looks like a typical slow-loading Microsoft website. Add-Ons are categorised in the four categories Security, Time Savers, Browsers and Entertainment.

Microsoft finally made it happen and released the final version of Internet Explorer 7 to the public. You can download it from the official internet explorer website at microsoft.com. The download works without problems for everyone, the installation checks for WGA (windows genuine advantage) which means you can't install it if you have no legit key. Please note that Internet Explorer 7 is currently only available for Windows XP and Windows Server 2003.

Find visited urls and cookies of every user in index.dat

When you delete the visited urls and the cache in Internet Explorer after disconnecting your computer from the internet you are safe, right ? Many users think that it is impossible to find out which websites have been visited when they delete the cache and the history. This is not true..

Internet Explorer users beware: Stealth Web Page Recorder is a little add on for internet explorer that records every visited webpage including every action on that website like entering passwords, forms, emails and account numbers. The add on can't be spotted in the task manager nor in advanced tools like process explorer, it is a so called BHO - Browser Helper Object. 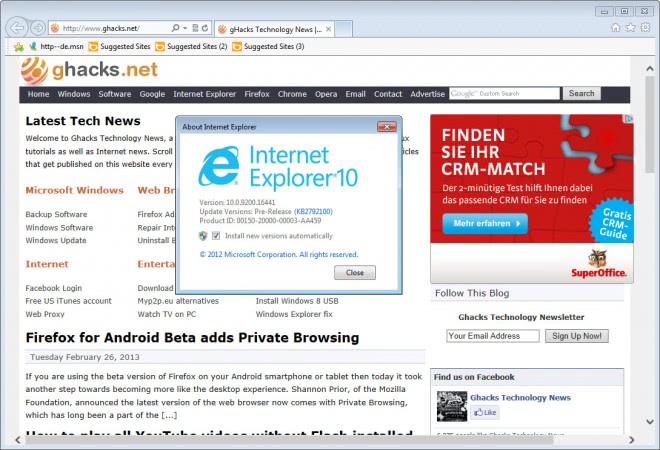 A new version of Microsofts upcoming Internet Explorer is available for everyone, this time it is the release candidate 1. Downloads are available for Windows XP service pack 2, Windows Server 2003 service pack 1 and Windows x64 editions. A previous version of Internet Explorer 7 will automatically be uninstalled prior to the installation of the new release candidate 1 version.