Most of us have used some system information tool at some point or the other to quickly analyze the devices, hardware, and software of a computer system. Tools like HwInfo display information that is useful in various situations. SystemInfo belongs to the genre and is an open source software. 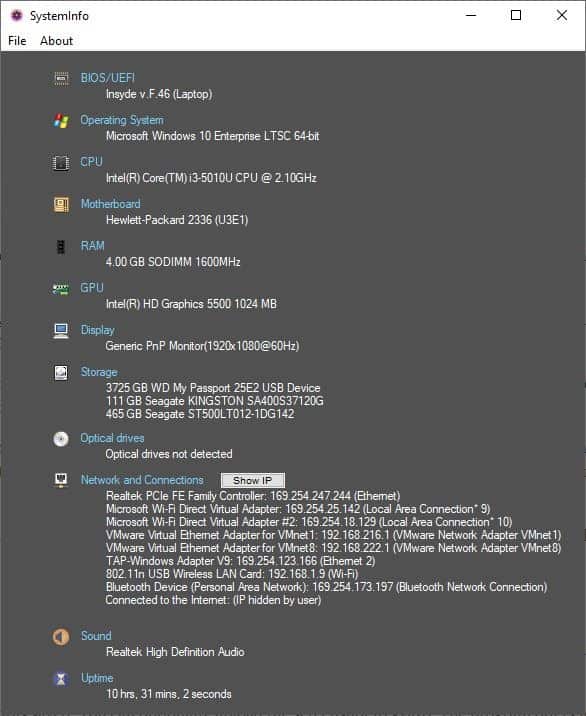 The program is a portable software, so you can just download the executable and run it directly. The interface looks a lot like Piriform's Speccy, and as a matter of fact even the GitHub page for the program has a Speccy tag. Maybe it was the inspiration behind the application?

Do note that this is not a system monitoring application. If you want one of those, you can try Thilmera7 or Desktop Info, or Conky for Linux. Regardless of that, SystemInfo is quite the useful tool. You can view all of your system's hardware information on a single page. Built a new computer? Bought a new laptop? Run the program to see if everything is as it's supposed to be.

I'm not certain if this is a bug, but there are a couple of issues with the application. It detected only 1 of my memory modules and showed that the laptop has 4GB of RAM. In reality, it has 2 memory chips, and Windows detects it correctly as a total of 8 gigs. Aside from this, it works pretty well and accurately detected that the system doesn't have an optical drive, and has an SSD (which I have installed using a SATA Caddy in place of the DVD drive).

SystemInfo has a built-in screenshot saving option that you can access from the File menu. Snapshots are saved in the PNG format at a location of your choice. The default file name is saved in the following format: [email protected]_HH.MM.SS.

The file name contains the Year, Month, Day, Hour, minute and even the second when the screenshot was saved. You can optionally upload the screenshot to gyazo. The program offers to open the saved file in the default viewer. If you'd rather have a text based result, you're in luck. SystemInfo can save the details in HTML, XML or TXT documents. You can also Import XML files that you have saved previously.The Hide IP (Show IP) button can be used to toggle the IP address. This is useful when you're taking a screenshot of the window, or exporting it to a file, and wish to hide your IP address from prying eyes. The program is written in C++.

The fact that its portable makes SystemInfo a useful little tool to carry on a USB Flash Drive. And since it has no options to tinker with, it's suitable for all users.