Conky is a highly customizable system monitor for Linux

A couple of months ago, we introduced you to a Windows program called Sidebar Diagnostics; this time, we are going to take a look at a similar program for Linux.

Conky must be a familiar name if you have been using Linux for a while. It is a fork of a now defunct app called Torsmo. 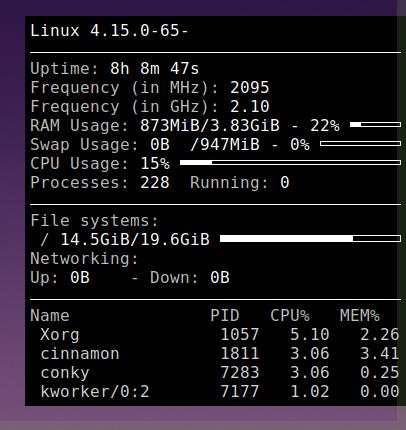 While it is a fork in the technical sense, it is more advanced than Torsmo. If you're running Ubuntu, Debian, Linux Mint, etc, you can just run the following command in a Terminal

For other distros, refer to the official GitHub page on how to install Conky.

It also lists the current top processes along with the memory and CPU usage of each; very useful for users and administrators who want to analyze the performance of the Linux system or keep an eye on resource usage.

Tip: To exit the app, use the command killall conky.

The program's highlight is the customization options that it offers. Navigate to the Conky.conf file and open it in a text editor.  Copy the content of the text file as we'll be using it as a guideline. To begin configuring the app, create a file called .Conkyrc in the home folder. Paste the copied text into this and start editing it.

For e.g. to change the white text to something else like say blue, edit the default_outline_color = 'white', and replace the word 'white' with blue. Next try moving the conky interface to the right or adding a new font and using it. Similarly you can change the values of the colors of other elements, font type, size, transparency, and more. You can get creative with it and even add or remove elements that are displayed in the widget.

There are many user configurations available online. So you can just download the one that you like and use it if you don't want to customize it yourself. You can also use user-created configs, themes, for learning how to customize/theme Conky from scratch. Speaking of which, there are many themes available for Conky. Here is how you install a theme that you have downloaded.

Tip: check out DeviantArt for a selection of themes.

Download any theme. I'll be using the Simple Conky theme from Deviantart. You will need the Ostrich Sans font if you want it to look as it does on the screenshot. Place the font's folder in the Usr/Share/Fonts/TrueType folder. 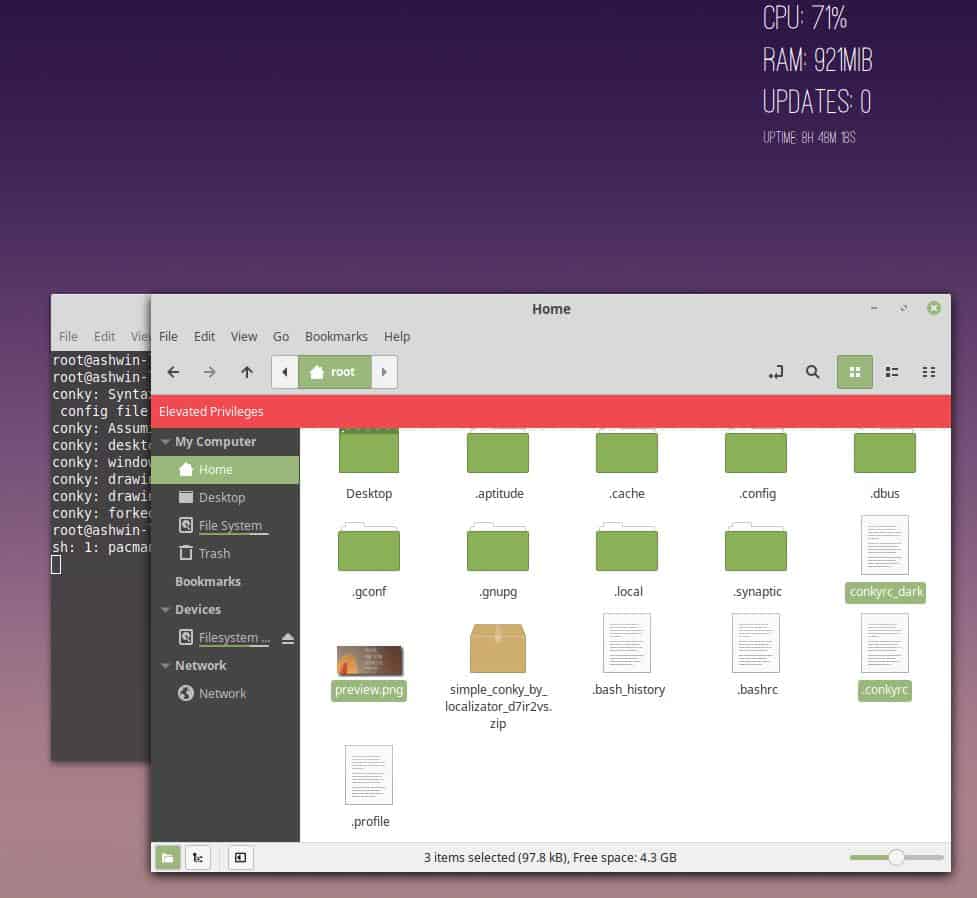 Extract the theme's archive to the Home folder, and rename conkyrc to .conkyrc. Restart conky How easy was that? You can of course, customize it further if you want to modify it.

Conky is a powerful system monitor for Linux systems. Configuration and customization options are powerful but fiddly, especially for users who are not used to editing configuration files manually.

Now You: Do you monitor your system's performance and hardware metrics?