Windows 10 updates are about to get a lot smaller - gHacks Tech News
ghacks.net

Windows 10 updates are about to get a lot smaller

Updating is definitely one of the sore topics when it comes to Windows machines. Microsoft changed the way updates are delivered -- from individual patches to cumulative update packages -- which made things more complicated for users.

The change removed control over updates from users and system administrators who face an all or nothing approach now. Even worse is the fact that updates build up on each other which means that you cannot just block previous updates anymore as they are included in newer updates as well.

That's a big issue, especially if one update causes issues on a machine. You are left with no choice but to remove the whole update package and stop updating the system in hope that Microsoft will fix the issue one day. 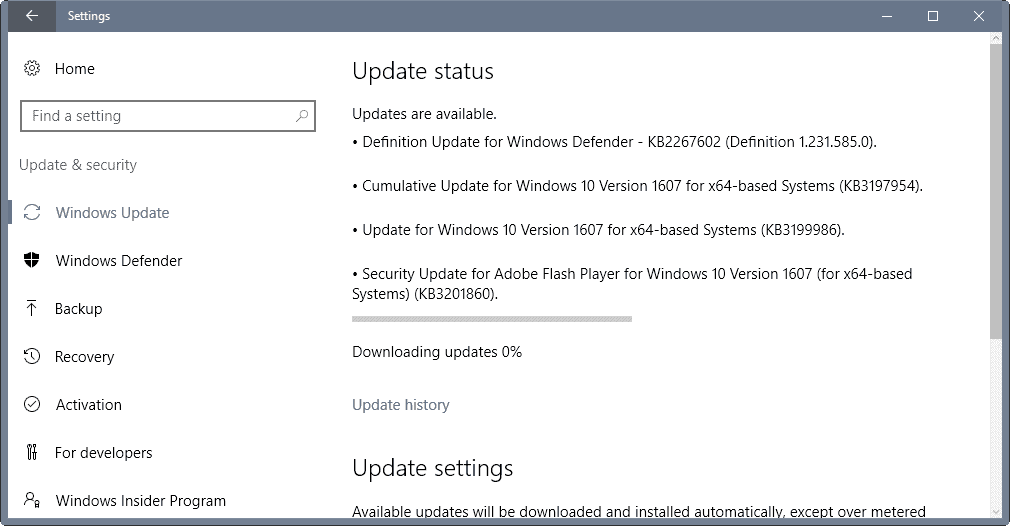 Other issues surrounding Windows Updates include a lack of information; Microsoft does not update support pages in time which means that you sometimes don't know what an update does.

Last but not least, updates seem to have grown in size considerably in the last couple of years. It is not rare anymore that updates with sizes of hundreds of Megabytes are shipped with feature updates for Windows 10 shipping in the Gigabyte range instead.

The Unified Update Platform (UUP) will change that significantly, at least when it comes to the size of updates.

According to Microsoft, PCs who benefit from UUP will see a decrease in download size by about 35% for major updates. The company plans to roll out UUP to Insider Builds soon and to regular Windows 10 systems with the Creator Update out in March 2017.

No word on the benefits for smaller updates for Windows 10. Since Microsoft did not mention those specifically, it seems likely that they won't benefit as much as feature updates but that is just a guess.

Microsoft enables differential downloads for all Windows 10 devices with UUP which explain the improvements.

As we rollout UUP, this will eventually be impactful for PCs where users can expect their download size to decrease by approximately 35% when going from one major update of Windows to another. We’re working on this now with the goal of supporting this for feature updates after the Windows 10 Creators Update; Insiders will see this sooner.

Another benefit of the new model is that update checks will be performed faster as Microsoft moves some of the processing from devices to the Windows Update service instead. The effect is a faster update checking and update operations time.

Now You: Did you experience any issues with Windows Update or updates recently?

Previous Post: « Checking for updates slow on Windows 7? Here is the fix
Next Post: Microsoft to discontinue EMET in July 2018 »