How to get rid of YouTube's new Google+ comment system

If you have been on YouTube recently you may have noticed the new commenting system that Google implemented on the site recently. Basically, if you want to comment, you need to have a Google+ account and page to do so.

Originally advertised by Google as a way to get a more personal comment experience and to get rid of spam and other unwanted comments in the process, it quickly became clear that things are not as rosy as Google painted them.

If you go through the comments, you will notice that many users decided to give themselves celebrity names instead of their real ones. You see hundreds of Barack Obamas, Jesus Christs and Hitlers on YouTube now.

Impersonation is however not the only issue that users experienced after the change. Many users discovered that they can post Ascii art on YouTube now, and that what they post has apparently no limit.

Some users have posted scripts of movies or entire books in the comment section, other offensive Ascii art.

That's all bad, and while it is likely that Google will do something about that sooner or later, it may be unbearable for users who frequent the site regularly.

Getting rid of comments

Some YouTube publishers have decided to close their comment sections for all of their videos starting tomorrow if Google does not react. While that is an attempt to get Google to react -- good luck with that -- it is not helping on all the other videos and channels on the site.

Here are three options to get rid of Google+ comments on YouTube.


Firefox users may check out No YouTube Comments, a browser extension for the web browser that hides all comments on the video streaming site.

Chrome and Chromium users may check out Hide YouTube Comments instead which does the same.

The userscript Toggle YouTube Comments [no longer available] hides all comments on YouTube by default. You can still click on a text button to display them again if you really want, but the default setting is to not display them at all.

To display comments again, click on the Comments link that has been added right underneath the video. Toggling works just fine and without reloads of the page. The only issue that I have encountered while using the script is that videos that are played without full page reload, for instance those in the sidebar, are not affected by the hiding of comments initially.

Just click again on the other hand and the comments are hidden from the page.

The second option removes the Google+ comments and replaces them with comments found on the popular website Reddit.

While there is no guarantee that there will be comments, it is usually the case if the video is popular on YouTube.

Comment Snob for Firefox removes some but not all comments on YouTube. It comes with a set of rules that you can activate, for instance to remove comments with profanity, excessive punctuation, capitalization, or a certain number of spelling mistakes.

While that is great, it also enables you to add words or phrases of your own to the extension that you do not want to see on YouTube.

All comments matching those words are removed as well. While it may take some time to create the list, you can be sure that it takes good care of recurring spam and comments that you do not want on the video hosting website. 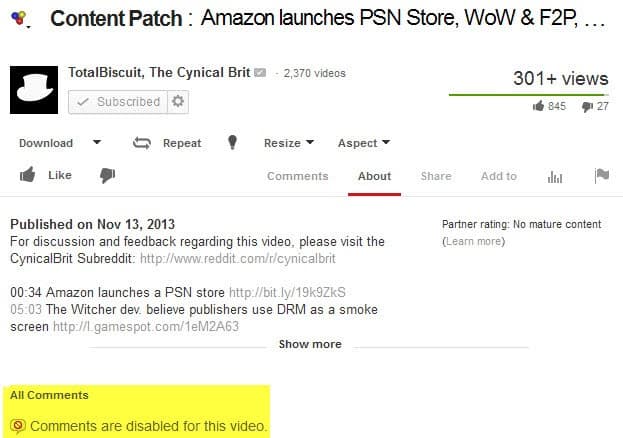 Article Name
How to get rid of YouTube's new Google+ comment system
Description
Find out how to improve the commenting on YouTube by replacing or modifying comments on the site.
Author
Martin Brinkmann
Publisher
Ghacks Technology News
Logo