Ever since Google acquired the video hosting platform YouTube it has been criticized for the unmoderated comment section on the site.

Comments are often filled with profanities and insults that many YouTube regulars have long since given up on the feature and started to ignore comments on the site for the most part.

Google for some time now tries to combat the spam problem on YouTube by asking users to switch from nicknames to real names in hope that less anonymity on the site would lead to less profanity on it.Since it is an optional feature, it is unlikely that it will have a big impact on the current comment landscape.

The Firefox add-on Comment Snob seems like a better alternative. It enables you to filter out all or select comments on YouTube based on rules that you define in the options. 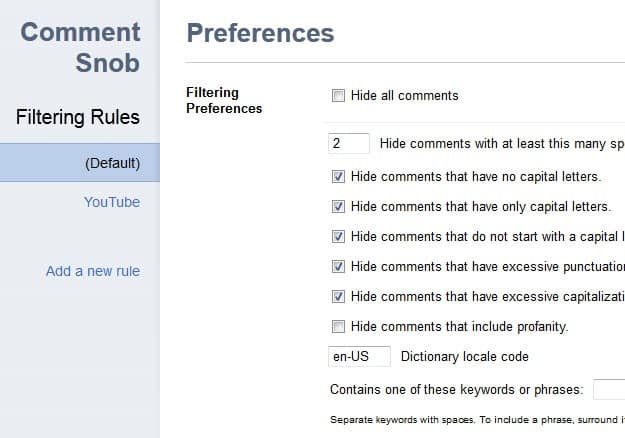 It in particular allows you to:

The extension displays a single line in place of removed comments that highlights why the comment has been removed. Options to display select comments directly on the page are available, which can be useful if a comment is part of a thread that you are interested in.

The program manipulates the comment section on page load with no apparent delay in rendering time. Non-English users need to change the dictionary locale as it is set to en-US in the options. Rules for other sites can be added to the extension. A documentation on how to do that is available on the developer website.

The extension filters out many comments on YouTube. Sometimes, you may be left with no comment at all after the page has been processed by it. Especially the option to add custom words and phrases can be useful to remove popular comment types that you are not interested in.

Update: The extension is fully compatible with YouTube's new Google+ comment system. You can use it in pretty much the same way as before. Considering that things have turned south after Google made the switch, you may be in need of the comment even more than before.