When you first start the program you are presented with three tabs at the top that lead to the program's core functionality. The Junk Scanner scans select hard drives for temporary files. It does not offer as many third party cleaning options as CCleaner or Bleachbit, but is pretty solid when it comes to cleaning browser and operating system traces and temp files. 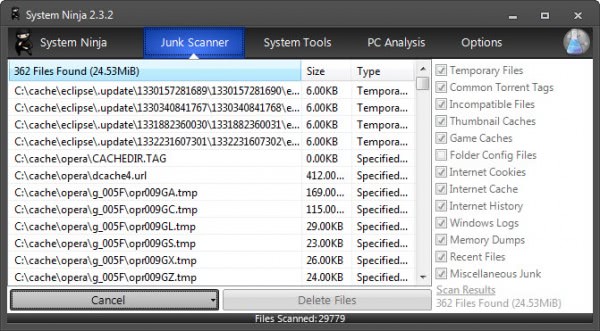 System Ninja has been updated to version 2.3.2 today. Existing users can check for updates under Options > Settings > Check Now. The program should recognize the new version and offer to update to it automatically. New users can download the latest version from the developer website over at Singular Labs.

The new version introduces new features to the program that include an option to ignore specific programs which basically protects its data from being cleaned by the application. The new System Ninja version ships with Polish, Russian and Swedish interface languages, improved Windows 8 compatibility and an option to include beta versions in the update checks.

The software is not as feature rich as CCleaner. There is for instance no option to add custom folders or locations to the cleanup. Users who are just looking for a temporary file cleaner on the other hand find both programs to be more than capable for that task.

Are you a CCleaner user, or do you prefer a different program to clean up your system?

Previous Post: « Windows 8 To Go On Sale In October According To Bloomberg
Next Post: « Read Free Kindle Ebooks with Kindle Reader Apps