Firefox users who open the official Firefox Add-ons repository may notice a new warning message displayed on most extension pages.

The warning reads: "This extension isn't monitored by Mozilla. Make sure you trust the extension before you install it". A read more link points to a support page that explains the concept behind the Recommended Extensions program. 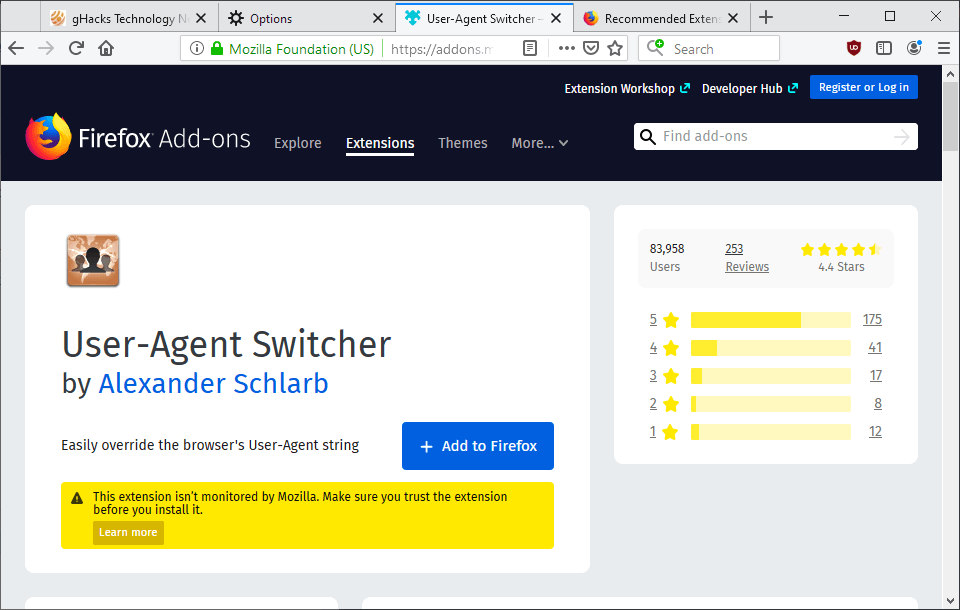 Update: Firefox users may also get "This is not a Recommended Extension. Make sure you trust it before installing." End 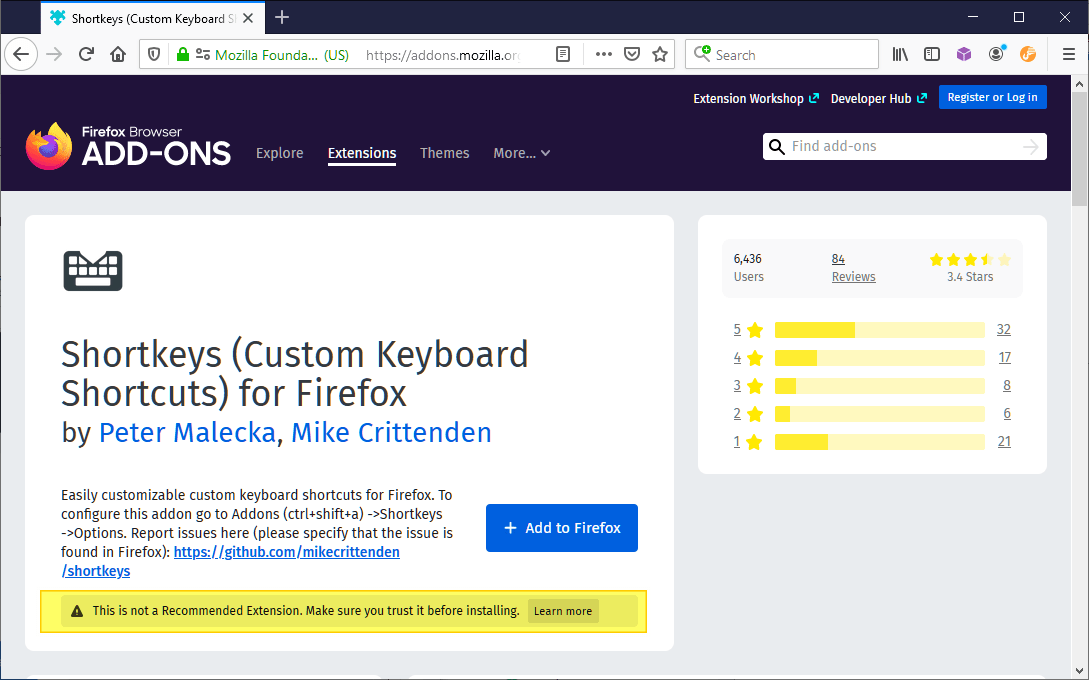 The warnings were not displayed before on Mozilla AMO, the name of the add-ons repository, and you may wonder why the warnings are displayed right now.

Mozilla announced the launch of the Recommended Extensions Program for Firefox in early 2019. The main idea behind the program was to create a list of featured extensions that Mozilla would promote in various ways including in Firefox itself but also on Mozilla AMO.

Extensions and their developers had to meet a number of criteria including that extensions needed to be safe and relevant, that the developer was committed to the extension, and that they needed to be "really good" at what they offered.

Due to the curated nature of Recommended extensions, each extension undergoes a thorough technical security review to ensure it adheres to Mozilla’s add-on policies.

Additionally, extensions would would be carefully monitored by Mozilla. Unlike the rest of the extensions, Mozilla would analyze the code of each of the extensions and of any update before allowing it to become available to users of the browser. The process is not all that different from the process that Mozilla used several years ago sans the promotional effects. The organization used to verify each extension before as well but switched to an automated system since then with manual checks after extension availability.

Recommended Extensions have a higher level of trust associated with them because of the extra vetting.

The yellow warnings are displayed for any extension on the Firefox Add-ons website that is not recommended by Mozilla. While it may make sense on first glance to inform users that an extension is not monitored, it seems likely that at least some users will be put off by the warning. 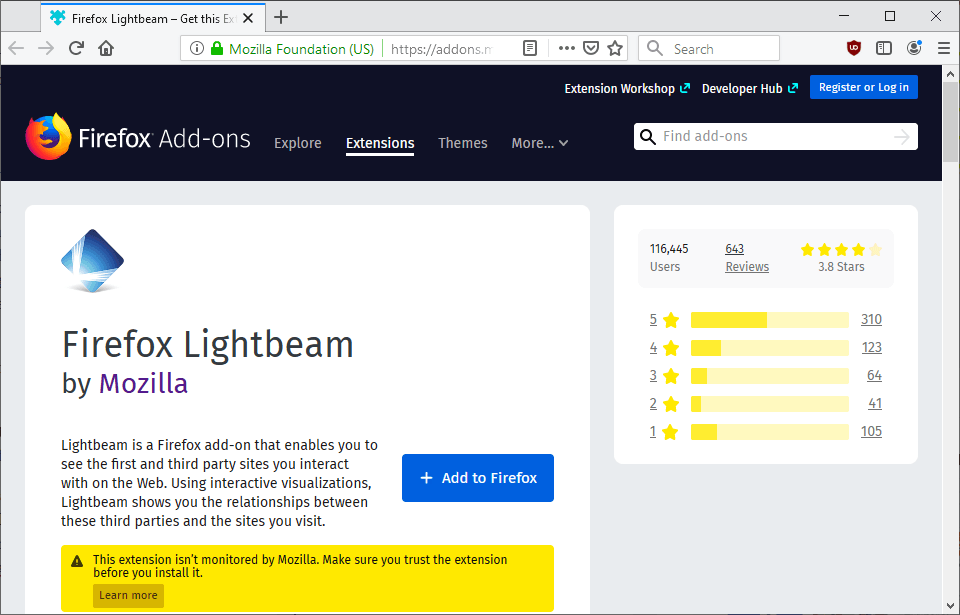 Extension installations may suffer because of that and it is likely that extension developers are not happy because of that. The warning is displayed on pages of very popular long-standing Firefox extensions such as Tampermonkey, User-Agent Switcher, Adblock Plus (the extension with the most installs by far), or Avast Online Security. Even some of Mozilla's own extensions, e.g. Easy Screenshot by Mozilla Online, Firefox Lightbeam, or Notes by Firefox, are listed with the warning.

Firefox Multi-Account Containers is not recommended but one of the few exceptions to the rule as the warning is not displayed for that extension.

Mozilla is right when it states that a particular extension is not monitored by the organization. That's not really the fault of the extension developer on the other hand. Then there is the question of finding out if an extension is trustworthy. Mozilla provides no guidance or information on that, and most Firefox users can't analyze the code of extensions to verify that the extension is trustworthy. And even if they could, the analysis would not include any of the updates that may be pushed out by the developer.

Now You: what is your take on the warning?

Martin Brinkmann is a journalist from Germany who founded Ghacks Technology News Back in 2005. He is passionate about all things tech and knows the Internet and computers like the back of his hand. You can follow Martin on Facebook or Twitter
View all posts by Martin Brinkmann →
Previous Post: « Eyes Alarm is a nice take-a-break add-on for Firefox and Chrome
Next Post: Mozilla plans to roll out DNS over HTTPS to US users in late September 2019 »