How to speed up your computer the right way - get an SSD - gHacks Tech News
ghacks.net

In my last article here on the site, I suggested that running system cleaners, tune-up tools, and other third-party tools for the purpose of speeding up your PC significantly is not advised. While there are certainly some tools that may address certain issues that you may experience, e.g. by running a tool like Throttlestop to prevent CPU throttling, or by removing unneeded programs from autostart or making sure that there is enough free disk space on the drive for the pagefile and caches.

If you want to go beyond that, you probably wonder how to speed up your computer? 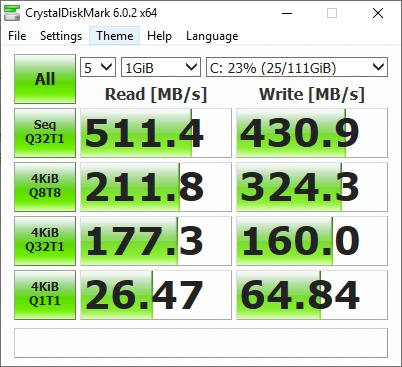 There are a few different ways to do so. Let's get a few of the complex options out of the way, before I reveal the ideal option.

This isn't recommended for normal users as it is quite technical and because there is a chance that it may damage the computer's hardware or cause other issues such as crashes that may lead to even more issues, e.g. data loss.

It takes time to understand how the processor or video card work, and to find out whether overclocking is even worthwhile. Generally speaking: if you have an AMD Ryzen processor you can overclock it, but if you have an Intel processor it's slightly complicated.

Basically, you will require a K-CPU to overclock, i.e. an i5-7500 cannot be overclocked, but an i5-7500K can be. Find out what you have, do some research about the pros and cons to understand the process and if it's actually worth it. You can overclock Graphics cards more easily. The performance increase that you may get from overclocking may not be huge and you may reduce the lifetime of the component and increase power consumption and heat generation at the same time.

Many people rely on Windows programs for their school/business work and Linux may not be an ideal solution for those. It requires that you install a different operating system on the device and get to learn it. Linux has come a long way from the "installation requires a computer science degree" to how things are today; distributions like Linux Mint, Manjaro, or even Ubuntu offer experiences that are very similar to what you get on Windows.

If you are a home user willing to shift to Linux, you may find that it is lighter on resources and that may lead to better performance when you use the computer. Obviously, you may not be able to run all programs or games on Linux that you ran on Windows, but there is Wine, and Steam maker Valve's continued effort to push Linux.

My advice: try a live USB to see if Linux is your cup of tea before installing it on your main drive. Note that performance is better if you run it from a hard drive and not a USB drive.

A lot of users assume that adding more RAM can help improve the overall performance of the computer. But I would say this is not true in all cases. While you will boost performance by adding more RAM to your system if you have less than 4 Gigabyte installed, you may not be able to see impressive gains after hitting that magic number.

You may need more RAM if you:

More RAM does not hurt performance on the other hand and you could use it for other purposes, e.g. the creation of  a virtual RAM disk to move certain caches or applications to the drive.

Tip: check out our overview of the best Ram Disk programs for Windows.

How to speed up your computer - get an SSD

A Solid State Drive is the best way to speed up a computer provided that you don't have one installed already that is not from one of those earlier generations of SSDs.

They are a lot faster than traditional mechanical hard drives and have higher life expectancy as well. The prices of SSDs have fallen considerably over the past year: you can get a great performing Solid State Drive with 120 Gigabytes of storage for about $40 and 240 Gigabyte drives are not that expensive anymore either.

Things you will need

Which SSD should I choose?

This is something that really depends on your budget and requirements. If you just want to speed up your PC just go with a 2.5-inch SSD made by Samsung or Crucial or any other company. Crucial is owned by Micron and makes the NAND storage chip in-house. The speeds of each drive differ so take that in your calculations as well.

If money isn't an issue and you have an M.2 slot on the motherboard, you should consider getting an M.2 drive. These are PCIe SSDs which look like a RAM module (thin, long, flat) which you connect to the m.2 slot and screw the other end in place. These have better read/write speeds than a standard SATA SSD, because they connect directly to a PCIe based slot without using cables. You may find that a 500GB SATA SSD is cheaper than a 250GB m.2 SSD. Basically regular SATA SSDs with more storage are more affordable.

If you want the best speeds though, look for an NVMe SSD. They are even more expensive, and connect via the M.2 connector. But since they use the NVMe protocol, they offer speeds which are higher than M.2 which uses SATA.

This isn't complicated but there are two ways to add a regular 2.5-inch SSD to a laptop provided that you can replace it and that you can open the laptop.

Does it have a drive bay on the back?

Check if your laptop has a drive bay on the back panel. It should be a small rectangular cut-out with a couple of screws. If so, you don't need anything else. Get an SSD and add it to the bay. Some laptops may even have an additional drive bay. You can replace the old HDD with the SSD, and use the older drive in the other slot. There are laptops which have just one drive bay in which case the SSD will replace the old HDD.

Tip: You can get a 3.5-inch HDD enclosure which is basically a SATA to USB casing, that allows you to use the old HDD as a portable drive.

Does it have an optical drive?

If your laptop doesn't have a drive bay but has a DVD drive you can use a caddy and replace the DVD drive with the hard drive. Make sure to choose the right sized caddy. Usually the optical drives have a sticker with their model number on it: search for the information on the sticker and you should get the dimensions, i.e., whether it is a 9.5mm or 12.7mm. You can also search for your laptop's model number + the words SSD caddy (for e.g. Dell Inspiron 5559 SS caddy), and you may run across posts/reviews from other users who upgraded similarly.

Tip: If you want an optical drive, you could consider buying an external DVD drive which connect via USB. It will not only allow you to use DVDs, but also serves as a portable drive which can work with other computers.

I have 2 SSDs (one which I have been using on my PC for a few years). The following is my experience from a few days ago.

I have a 5 year old laptop with basic specs. It is powered by a core-i3 5010 processor, an Intel HD5500 iGPU and 8GB of RAM. I can't believe I used to game on this laptop until I built my PC. I had played many games including GTA 5, Skyrim, Diablo 3, to name a few, on medium settings on this laptop. But it has aged rather badly, especially the HDD which according to CrystalDiskInfo, is failing.

Windows 7 took a few minutes to boot and programs opened with delay. I would have replaced the HDD myself if it was the kind which came with a drive bay on the back panel. This HP laptop opens from under the keyboard, I'd need to open it with a flat prying tool (or spudger) while not damaging the cables that are connected underneath.

But replacing an HDD with a HDD is not a good idea since it's not an upgrade at all. And since I had been using an SSD on my PC, I knew how to fix my laptop's woes. Fortunately, this laptop has an optical drive (DVD drive). So, I bought a 9.5mm caddy for about $10 and a 120GB SSD for $22, installed the drive in the caddy and replaced the optical drive. One screw was all it took for this. After a fresh install of Windows 10, the laptop boots in under 20 seconds (compared to the 3-4 minutes it used to). All programs launch instantly, and it's as if I bought a new computer.

You can clone the Windows installation on your HDD to your SSD using Macrium Reflect Free, Acronis or other backup tools, and have a fully working computer with all your settings and programs in less than 30 minutes. Many manufacturers of SSDs offer tools to copy the contents of a hard drive to the newly purchased SSD as well.

Don't forget to install the firmware updater for your SSD. It's a software from the manufacturer (Samsung Magician, Crucial Storage Executive, Kingston SSD Manager, etc., ) which can also be used to check the SSD's health.

DO NOT defragment your SSD, as it serves no purpose. SSDs function differently, they're essentially a storage chip with a firmware which reads the data. HDDs on the other hand have a mechanical part to read/write data (like a pen and paper). Besides defrag programs write data on your SSD, which is something not recommended.

If you have an old laptop or desktop that you wish to keep around or use as a spare, get an SSD. You will literally feel the difference the second you start booting from the SSD, it will take seconds instead of minutes.

Previous Post: « PSA: Don't use system cleaners, they won't speed up your PC
Next Post: Basic things to do after a clean install of Windows 10 »