While mostly used for memes and instant messaging these days, Animated GIFs can be useful in various ways. You can use it to create a tutorial or demo, or an ad, or even use it for tech support.

You can even use GIFs in YouTube videos, though you may want to add some music or a voice recording to keep your audience entertained. But the question is: how do you create a GIF on your computer?

You don't need Photoshop or a video editor, or any special skills, or even have to spend a dime. You can create animated GIFs for free using ScreenToGif. It is an open source application which lets you record the content of your screen, and save it in the GIF format.

It does support other formats like APNG, PSD, AVI video, and also lets you save every frame as individual images, or a project which you can edit with the program (and resume editing later).

The start screen of ScreenToGif has a simple interface with 4 options: Recorder, Webcam, Board, Editor. Each of these has its own UI.

The Recorder is the primary feature of the application and what you will be using to capture the content of your screen. Selecting Recorder opens a pane like a camera's view-finder. Your recordings don't necessarily have to be full- screen, you can resize this pane and position it over the content that you wish to record. There are a few different options to resize the recorder window, the easiest of which is to click-and-drag on the edges.

You can manually set the width and the height (in pixels), in the bottom right corner of the recorder. If you wish to record a specific program's window, you can click-and-hold the cross-hair button and mouse over to the window of the program that you wish to capture the content from and let go of the mouse button.

The record button starts the capture, and the stop button ends it (and opens the editor). You can select the maximum fps (frames per second from 1-60) from the toolbar. You can access the recorder's setting from the gear cogs icon.

You can enable/disable various options including the mouse cursor, mouse clicks, screen magnifier, among various other options.

The alternate recorder interface can be enabled from ScreenToGif's options. It is incredibly tiny and can be placed anywhere on the screen. It has nearly the same options as the default interface, the only difference is the drop down menu, which you can use to choose among the following: record area, window and screen. The record area option is easy to use, just draw a rectangle and it will record the content within its boundaries. 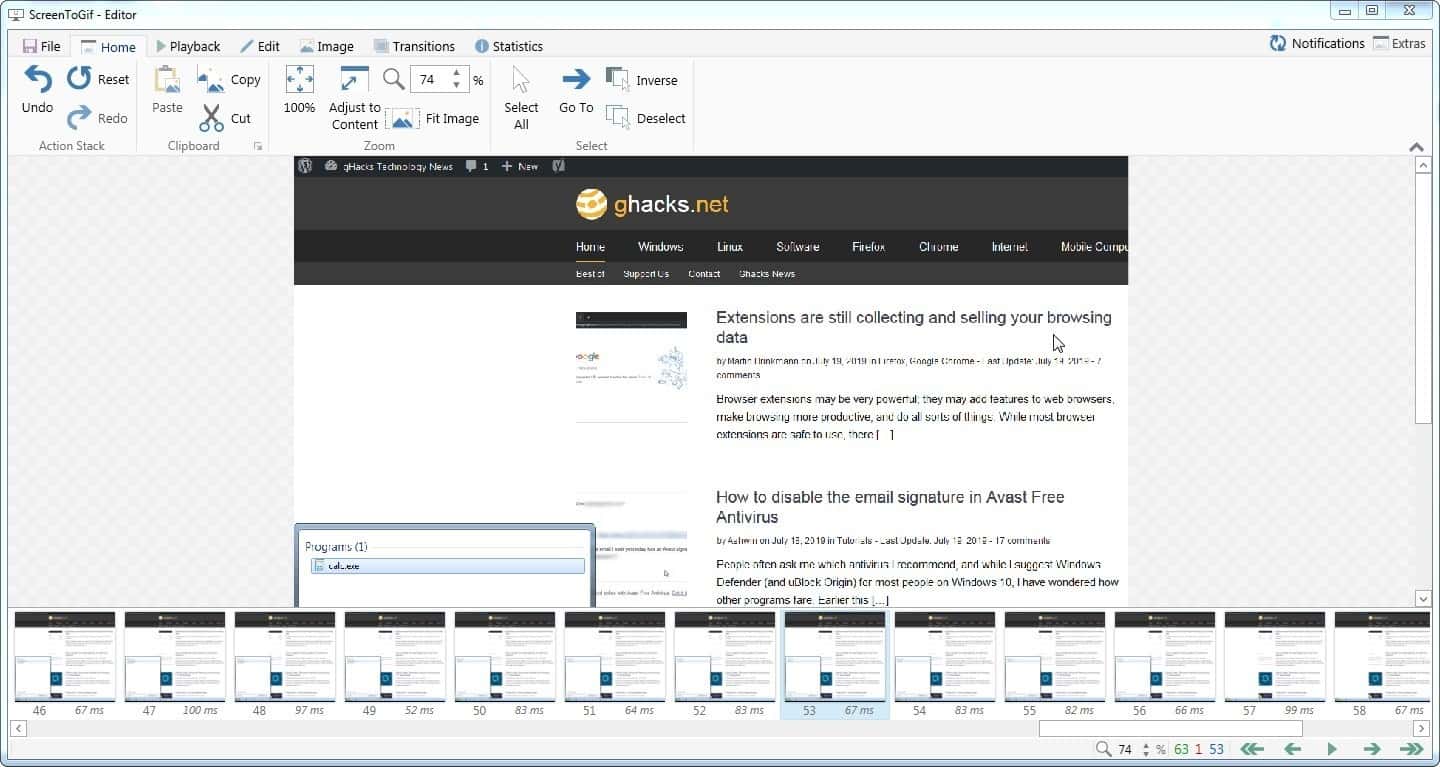 This is the secondary feature of ScreenToGif, which you can use to edit the content that you have recorded. Despite what can appear as a slightly intimidating appearance, it is actually very user-friendly. The main area of the UI shifts to display the corresponding options from the menu bar.

There is a timeline at the bottom of the screen, which displays every frame of the recorded content. You can use the options below it which includes a horizontal scroll bar, buttons to jump to next/previous/start/end frames, to navigate through each frame of the content. The File menu can be used to start a new recording, add an existing one, or to save the current project. You can also load a file or a recent project from here.

Tip: Unsaved projects will be saved temporarily, and can be accessed from the Recent Projects option in the Editor, for a few days. But I'd still advise you to save projects manually.

The Home tab is home to basic viewing/editing options like zoom, resize, undo/redo, cut/copy/paste, select all, etc. You can preview the recording in its current form with all the edits you have made, from the Playback tab. The Edit tab can be used to delete frames, remove any duplicates, reduce frame count, set delay options for the frames.

Tip: You can reduce the size of the output file significantly, by deleting unwanted frames, especially the ones in which there's nothing different from the previous one.


The Image tab is priceless as you can use it to add an image/text watermark to your recording. It is also home to more options like adding text, titles, captions, shapes, rotation, resize, cropping etc. You can add transitions to your recording from its namesake tab. And finally, the statistics tab is useful for learning how many total frames there are in the recording, the total duration, frame size, etc.

When you are done editing, go to the home tab in ScreenToGif and select save as. This opens a pane on the right which lets you select the format you wish to save the content into. You need to choose the folder where the folder where the output file will be saved, and also give your recording a name.

There are 5 encoding options for GIF animations: 2.0, 1.0, System, FFmpeg, Gifski. While the last two depend on codecs, the first 2 use the program's own encoders. I found these to be the best options. They allow you to manually adjust the quality of the GIF, choose between an endless loop option or limited number of loops.

By default, ScreenToGif uses 1.0 encoder, but I prefer to use 2.0 because it optimizes the file better, which results in a smaller file size. Select the save option and wait for the program to process it, and the GIF is ready to use, for e.g. you could attach GIFs in emails, IMs, Twitter, Facebook.

When Windows 10 was launched, some of my friends who were new to it were asking me how to do this, how to enable that, etc,. As someone who had been on the OS since the very first Insider Preview in 2014, I found it much easier to help them with a visual guide, than explaining it to them over a chat. for e.g. How to change the default apps in Windows 10. That's when I began using screen recorded GIFs, though I was using a different program, before a friend recommended ScreenToGif to me.

You may have come across the program on gHacks earlier, it was an unfortunate victim of fake open source applications which were being charged for, on the Microsoft Store.

Previous Post: « Beware: CCleaner may install CCleaner Browser and remap file associations
Next Post: DirLister is an open source program which can print a list of files and folders »