Mozilla released Firefox 61.0.1 to the Stable release channel of the Firefox web browser today. The new version of Firefox fixes a number of bugs and comes with some improvements as well.

The organization released Firefox 61 to the Stable channel in June. The new version of Firefox patched several security issues, added a notification when the homepage is changed by add-ons, and enabled Tab Warming which speeds up the tab switching process in the browser.

Some users ran into secure connection failed errors after upgrading to Firefox 61 but those seem to have been fixed by now. 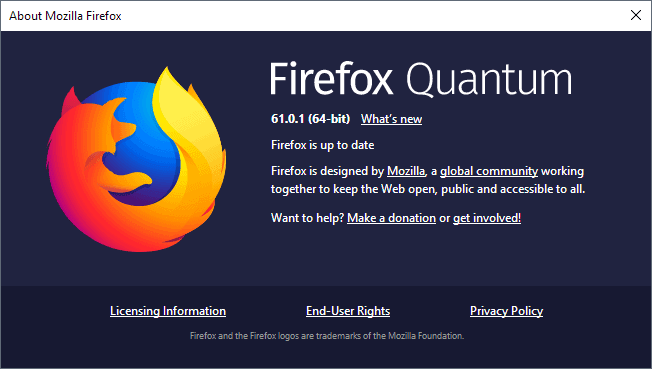 Firefox 61.0.1 is already available through the web browser's automatic update functionality. Just select Menu > Help > About Firefox to display the current version of the browser and have it run a manual check for updates.

You can download and install the new version right then and there, or, if you prefer it, download it from Mozilla's official website instead. Note that automatic updates sends only changed data whereas the download on Mozilla's website downloads the entire browser.

The Firefox 61.0.1 release notes list the following changes next to that.

Martin Brinkmann is a journalist from Germany who founded Ghacks Technology News Back in 2005. He is passionate about all things tech and knows the Internet and computers like the back of his hand. You can follow Martin on Facebook or Twitter
View all posts by Martin Brinkmann →
Previous Post: « How to change the default bookmarks folder in Firefox
Next Post: Right-click on extension icons to manage them in Firefox »