Netflix appears to be winning the fight against so-called unblocking services and VPN services that allow Internet users to access Netflix in different geographical regions.

Netflix's catalog of shows and movies is quite different from region to region. While all customer gain access to most of Netflix's originals series and productions, things are not equal when it comes to licensed shows and movies.

The US tops the list with about 5600 TV shows and movies, while other countries may get a fraction of that for roughly the same price for a subscription.

Customers could use unblocking services or VPN services to access Netflix's US offerings in the past. These services were sometimes the only option to access content not available in a region.

The company announced in February however that it would start blocking these services. 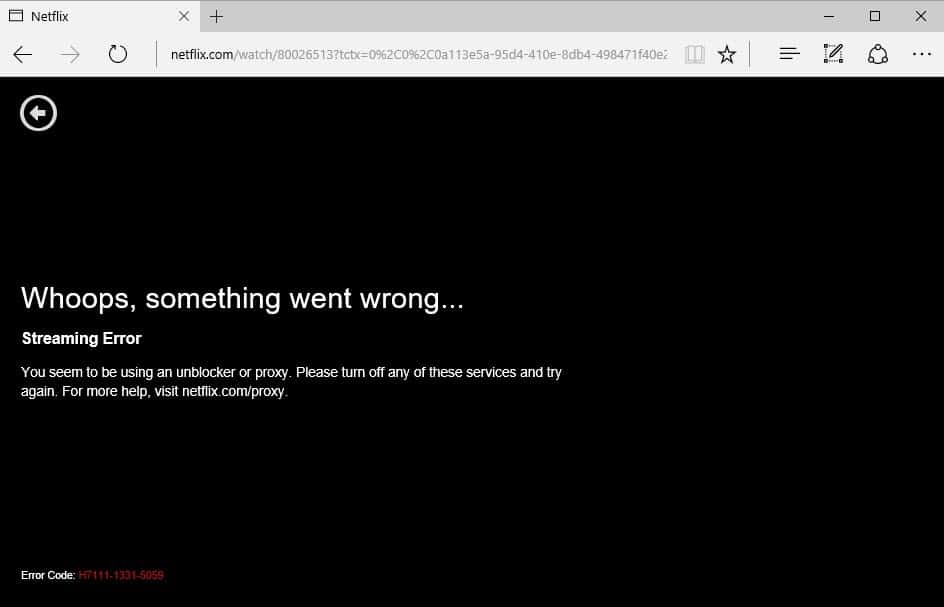 Customers who were able to access contents from other regions before February, suddenly found themselves in a situation where access was limited to their own region's offerings.

Most unblocking services made the decision to put up a fight of their own by adding new IP ranges, servers or entire networks to their services, or find new methods of defeating Netflix's protective measures.

This resulted in a cat and mouse game for some time, with customers on the receiving end of the fight as access worked temporarily only. This hit customers hard who paid for a service in advance as they could not use it anymore.

A new report by CBC suggests that many unblocking services have given up. The article mentions UFlix, Unblock-US and UnoTelly in particular. All advertised with unblocking Netflix access previously, but have pulled Netflix from their sites and are no longer advertising that customers can unblock Netflix.

This does not mean that all unblocking services or VPN services are not working anymore. It appears however that any access one may have at one time may be temporary at best as Netflix might put an end to that at any time.

Customers are in control

While Netflix may have won the fight against many unblocking services, it is not clear if it has won the whole battle. It is unclear if Netflix's decision resulted in lost business, but it seems likely that the company lost some customers in the process.

This may be true especially for regions where Netflix's offering is sub-par, especially when compared to what's available in the US. The company may also have lost customers who travel abroad regularly. Netflix customers from the US who visit another country for instance get the offerings of that country instead of the shows and movies they can stream at home.

There is little that Netflix can do to convince customers that it is fair to charge them the same price as customers in the US if they only get a fifth or even less of the catalog with their subscription.

As far as proxy services are concerned, there are still some that work at the time of writing. There is also the possibility that a service will come up with a new method of providing customers with access to Netflix content from other regions that Netflix cannot possibly stop.

One solution might be to utilize customer IP addresses for that, but it remains to be seen how effective that would be and if customers of the service would put up with that.

However, the situation is dire for most Netflix customers who relied on unblockers to access Netflix content offered only in other regions. Will those customers cancel their subscription? Only time will tell.

Now You: are you affected by Netflix's fight against unblocking services?