Folder Firewall Blocker is a free open source program for Windows devices that lets you block inbound and outgoing connections of every executable file in a specified folder.

One of the shortcomings of the Windows Firewall, and the majority of firewall programs for the matter for Windows, is that you cannot specify paths to block all executable files stored under that path from inbound or outbound Internet connections.

If you wanted to block all programs in the user folder or temporary folder for instance, you would have to specify them one by one in Windows Firewall.

If you don't want programs under a certain path to connect to the Internet, then you have only a couple of options to prevent that.

You can block all connections and whitelist those that you require, use a program like Windows Firewall Notifier that display notifications when programs try to connect to the Internet, or use Folder Firewall Blocker to block all executable files in a folder. 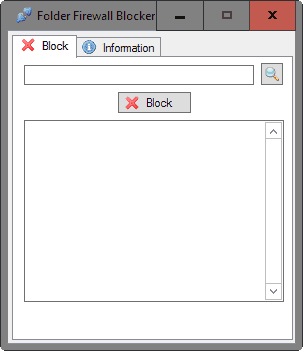 Folder Firewall Blocker is a simple program. All you need to do to make use of it is to launch it, click on folder to select a local folder, and then on the block button to block all executable files in that folder.

A prompt is displayed when you hit the block button that acts as a confirmation. Hit yes to proceed or no to cancel the operation. 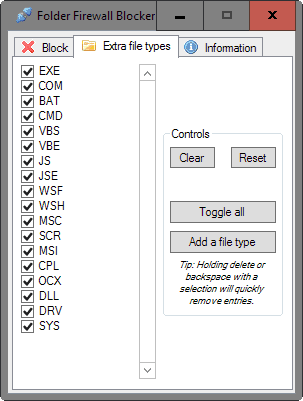 As great as the option is to block connections of every executable file in a folder, its use is limited.

The program has several shortcomings that prevent it from reaching a wider audience:

While you may be able to work around the second and third issue, there is nothing that you can do about the first.

You may simply run the program on each folder separately. While that works to get all exe files blocked, it may take a long time depending on the folder structure. If you wanted to block all user profile executable files from connecting to the Internet, you'd spend a long time running Folder Firewall Blocker on all folders under the path.

You can run the program regularly to cover new executable files, but the protection won't be realtime.

Folder Firewall Blocker is a promising program, especially after recent updates that introduce support for more executable file types and subfolder scanning to the application.

Now You: Which firewall do you use, and why?