Microsoft released the new Windows 10 Insider Build 14342 yesterday along with a new cumulative update for Windows 10 and security patches for all supported versions of Windows.

The new version is only available for devices subscribed to the Insider Preview Fast Ring, the cutting edge public preview channel that gets changes first before they are rolled out to the slow and release preview channel.

The new build features a number of improvements and fixes as usually. Probably most important from a user's point of view are Microsoft Edge improvements.

Edge Extensions are installed from Store 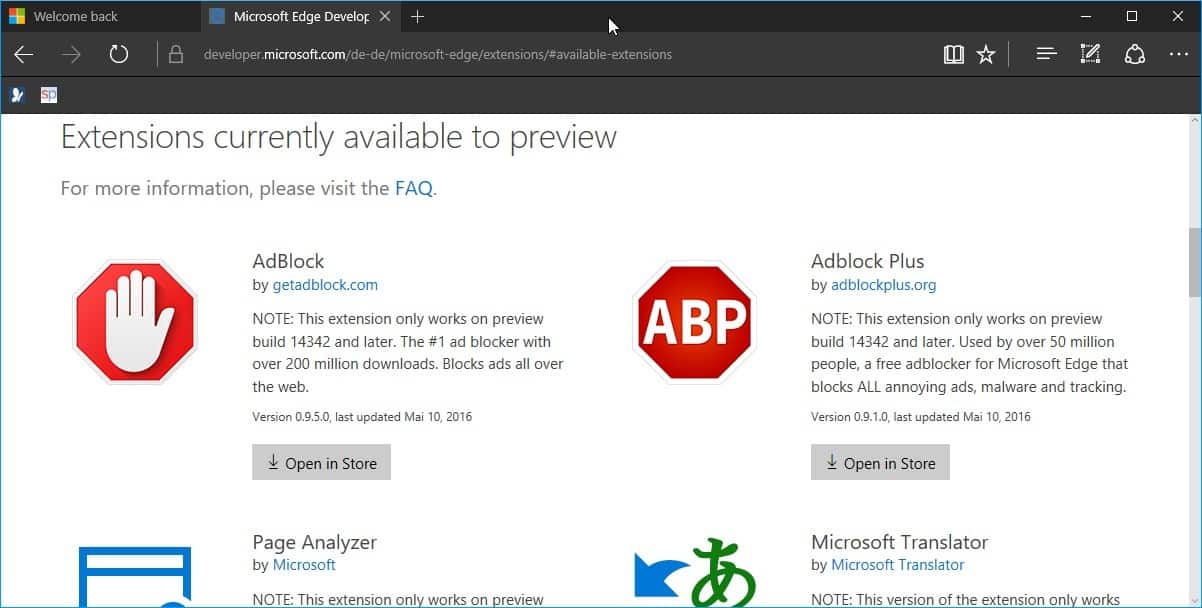 Microsoft Edge supported extensions for a short while only. Up until now, extensions had to be sideloaded into the browser by running a local installer or selecting a local folder the extension has been extracted to previously.

Not too bad for a first test version but not really comfortable, and not what Microsoft plans to deliver when the feature his the stable version of Windows 10.

Extensions support has been improved in build 14342 of Windows 10 as extensions are now installed from Windows Store directly.

It is still possible to sideload extensions, but the main method of installing extensions in Microsoft Edge has now been implemented.

This works currently by opening the extensions feature page on the Microsoft website. There you find listed all available extensions and a short description for each.

A click on "open in store" opens the Windows Store application and in it the extension's listing. You can hit the "free" button right away to install it in Microsoft Edge, or read the full description and user ratings first instead.

The installation happens in the background but Edge displays a prompt afterwards that highlights that a new extension has been installed.

The prompt lists all permissions the extension requests, and provides you with options to turn it on or keep it turned off instead. 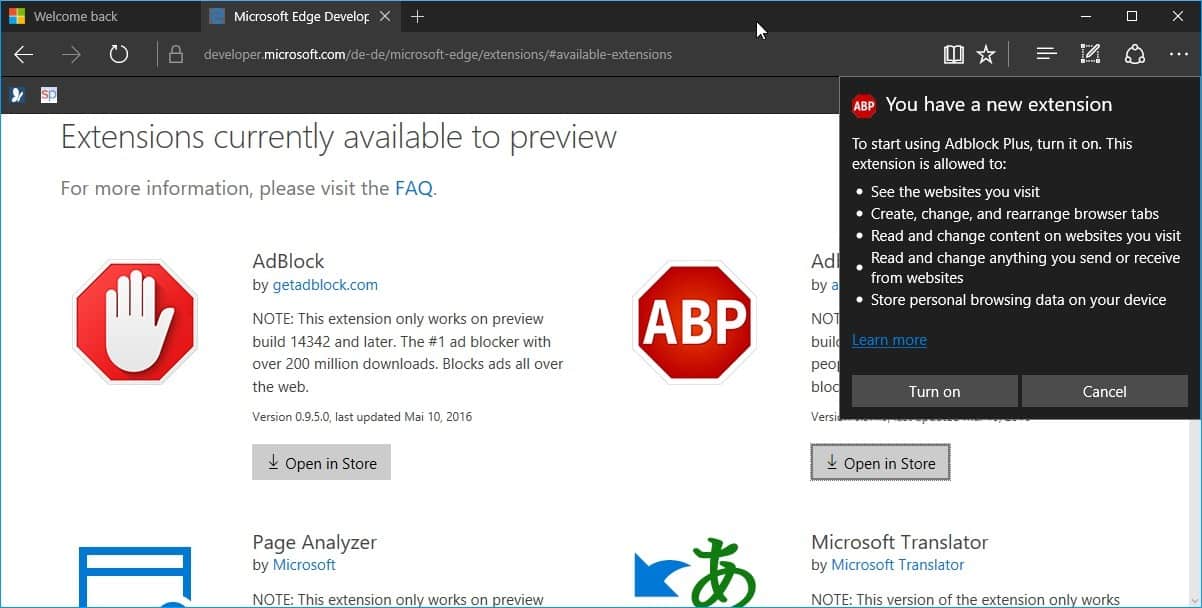 All installed extensions and their state are listed when you select menu (the three dots) and then extensions from the menu that opens up. 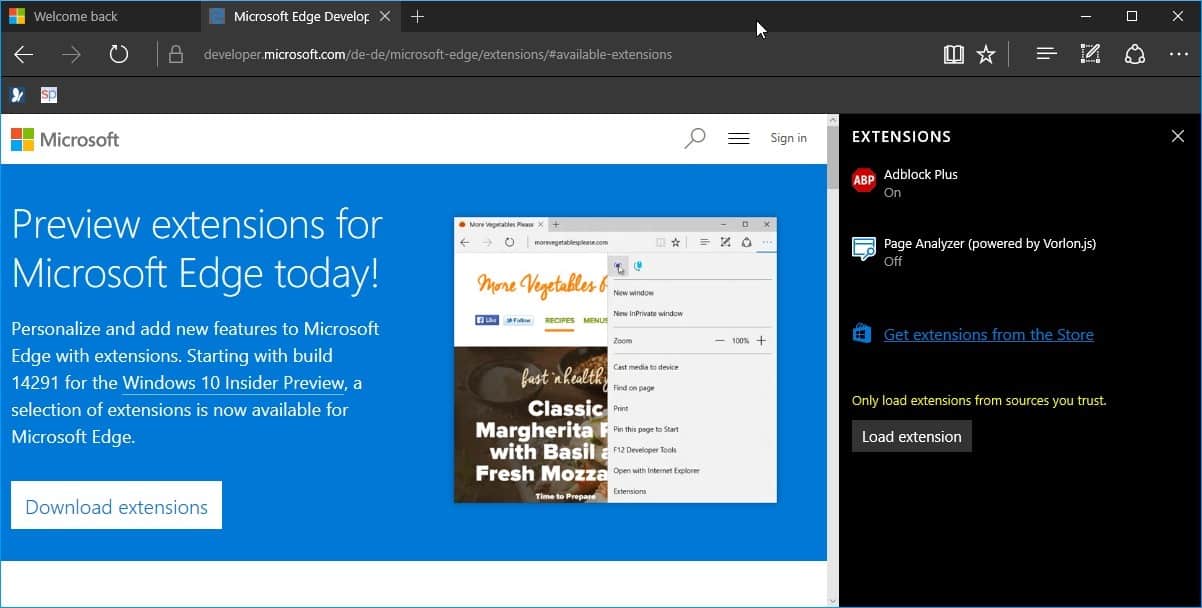 An options icon is displayed next to extensions when you hover over them, and a click on that opens an overview page listing the extension's permissions, and option to turn it on or off, to display its icon in the address bar, to open the full options the extensions ships with, and an option to uninstall the extension from Microsoft Edge. 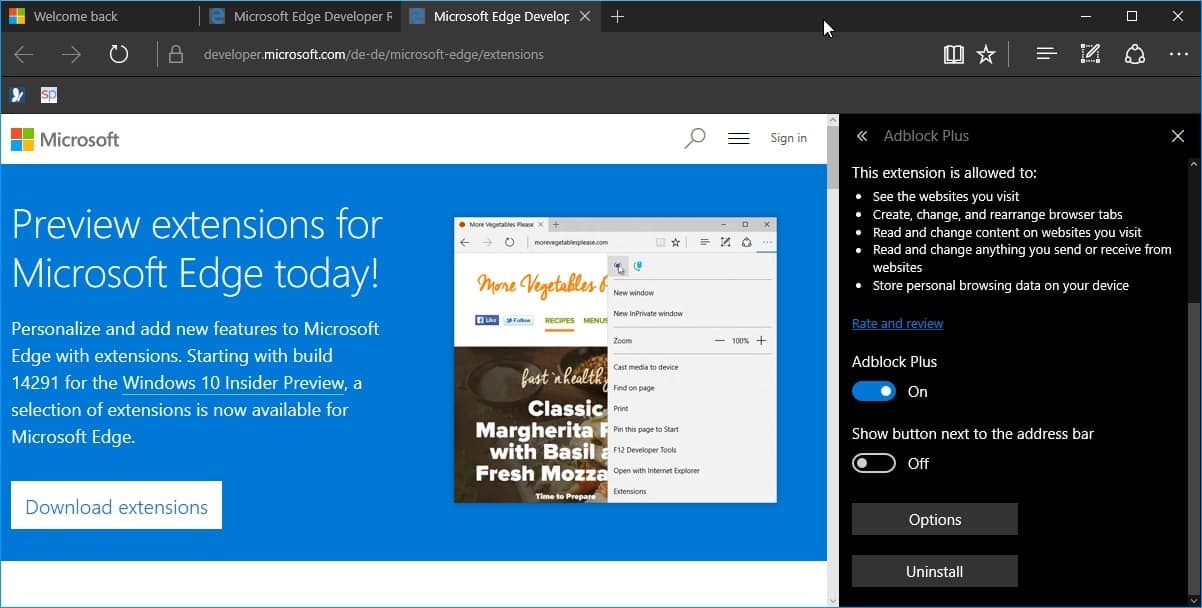 This moves Edge's extensions system one step closer to release. We still don't know how Microsoft plans to present available extensions to users.

The new build shipped with two additional Edge improvements. The first introduces real-time web notifications in Microsoft Edge that allow websites to send notifications using the Action Center provided that they have been granted permissions to do so.

The second brings swipe navigation to Microsoft Edge so that you can swipe to the left or right to navigate back or forward.

Now You: What's your take on extensions in Edge so far?