Sergey Tkachenko has created quite the number of programs for Windows 7 and Windows 8 that tweak various functionalities. To name a few: Skip Metro to bypass the start screen on logon, Close Threshold to close Windows 8 apps comfortable or Taskbar Pinner to pin anything to the taskbar.

While you won't see as many shortcuts as on the "All Apps" page of the system, it may still be something that you do not desire, for instance if you prefer to have full control over what gets added where on the start screen.

Windows 8 offers no built-in option to block program installations from adding shortcuts to the start screen. That's where AutoPin Controller for Windows 8 and Windows 8 Pro comes into play (you can't install desktop applications on Windows RT). 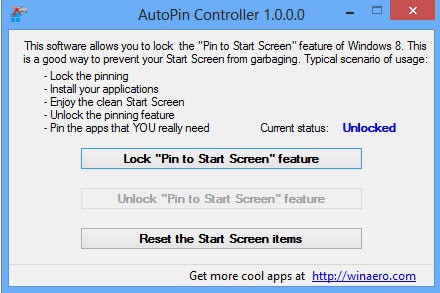 While it does not provide you with a permanent on or off switch, it is still noteworthy because it is a first. You need to run the program and select the "Lock Pin to start screen feature" to block any program from adding shortcuts to the system's start screen. Once you have made the change, you can install programs on the operating system without them adding a single shortcut to the system. This can be especially helpful if you are about to install a large number of applications, for instance right after installation of Windows 8 on your computer system.