The gaming platform Steam is an all-in-one game store and gamer launcher available for various platforms. Most Steam users know that they can create desktop shortcuts for games they have installed in Steam to start the games directly without having to open Steam first.

The following option explains how you can add Steam game shortcuts to Windows 8's start screen. The method is actually valid for all kinds of shortcuts, not only game shortcuts. 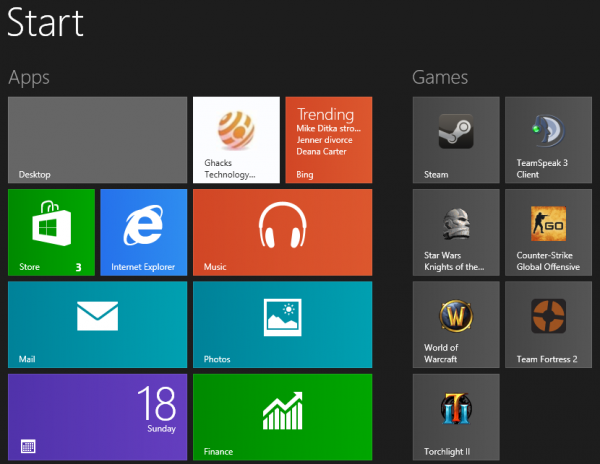 The first thing that you need to do is create the shortcut of the game. Launch the Steam software, right-click on all installed games that you want to create shortcuts for, and select Create Desktop Shortcut from the context menu.

You will notice that the shortcuts are placed on the desktop of the system. If you can't see them, right-click a blank area on the desktop and select View > Show desktop icons from the menu.

You can launch the games from the desktop right away, but will notice that they are not added to the start screen. For that, do the following:

Note that you can use the same technique for all other shortcuts that you may want to add to the start screen.The only thing that changes is that you need to right-click the program in the program folder and select Create Shortcut from the context menu to create the shortcut.

The method can be useful for portable applications for instance which are not picked up by default or system tools which you want to make available directly on the start screen. Doing so makes the programs available via the built-in search as well which is another bonus.