The boot process has been improved further under Windows 8 according to Microsoft, making it one of the fastest booting operating systems created by the company yet. But how fast is fast? If you are dying to know, or want to compare the result with that of another PC, operating system or a friend, you may want to take a look at BootRacer. We have covered BootRacer before here on Ghacks, and found it to be a great program to benchmark the time it takes to boot to the desktop.

The developers of BootRacer have released a beta of BootRacer 4.0 that is compatible with the Windows 8 operating system. While still in beta, I did not experience any issues using the software on a system running the final version of Windows 8. 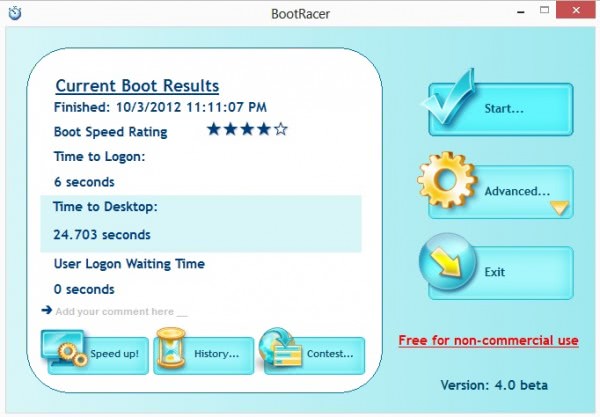 All you need to do to benchmark the boot process is to install Boot Racer 4.0 on your system and hit the start button afterwards. This configures the program to monitor the next system start. You get an option to restart the system right away or continue working on the system.

The next boot process is benchmarked by the application, and you will see the results on the screen after it completes. Here you find information about the time it takes the system to get to the logon screen and to the desktop, and how long the waiting time on the logon screen was. The latter is zero if you have configured windows 8 to sign in automatically. A rating is displayed on the screen based on the performance.

The results above are from a decent system with a Corsair Force GT SSD and no boot tweaks other than configuring one account to log on automatically.

You can configure the program to run on every boot, and check the boot history to see how it changed over time. Comments can be added to each entry, which you can for instance use to record changes that you have made to the system that affect the boot process. (via Techdows)