Windows 8 doesn't make file renaming any more difficult than in previous versions of the operating system, but it doesn't make it any easier either. Â Users can still right click a file and choose "Rename" or highlight multiple files and rename them all at once (a number will be added to the end of each). Â You can even change the metadata in media files, but you will need to do so one file at a time. Â Thankfully, there are free batch renamer programs available online to make these mundane tasks a little easier. Â Now a new one, known as FiRE has officially hit version 1.0 and looks to be one of the most promising utilities to hit this category in sometime now.

Once you fire up the apps then youÂ canÂ browse to a folder containing files you would like to rename. Â Let's say you have a folder of music that Windows misnamed. Â You can clickÂ File => New => Metadata Rule,Â and then begin selecting the tags from which you would like to form the new name. Â All of basic MP3 tags are here - album, artist, comment, composer, title, track, and year.

The program also has a "match/replace" featureÂ which can replace one phrase with another and is even case-sensitive. Â There is even a "list" feature which can turn your files into a list, even applying number - both regular and Roman numerals. 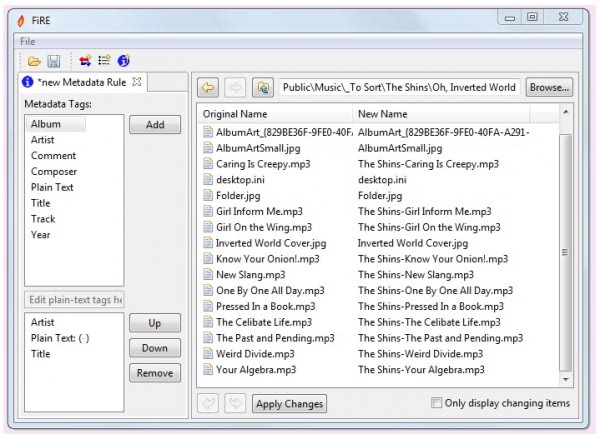 The app is free to download and install. Â More importantly, it doesn't try to install other things like browser toolbars and the like. Â In some brief testing I have done so far I have not discovered any real problems or drawbacks, but the program is still pretty new so some bugs may be possible. Â So far though, it promises to be one of the better batch rename utilities I have discovered.

The application works fine on all recent versions of the Windows operating system. Please note that it has not been updated since December 2010 at the time of writing.