These mockups do not necessarily make it into a future version of Firefox. Some will, some get modified along the way, while others simply won't be integrated at all.

Mozilla engineers and designers have posted new mockups recently which highlight some new features and changes that have been made in the past month.

The designers are still working on the new tab page of the browser. The idea right now is to merge the default homepage and new tab page into a single page that gets displayed when the homepage or a new tab page is launched in the browser. The layout and design has changed again. What you will notice right now are small down and right arrow icons that you can click on to display other information like the recently closed tabs, tabs that you have opened on other systems or bookmarks instead. The mockup showcases how the new tab page may look like on desktop computer systems, tablets and mobile devices. 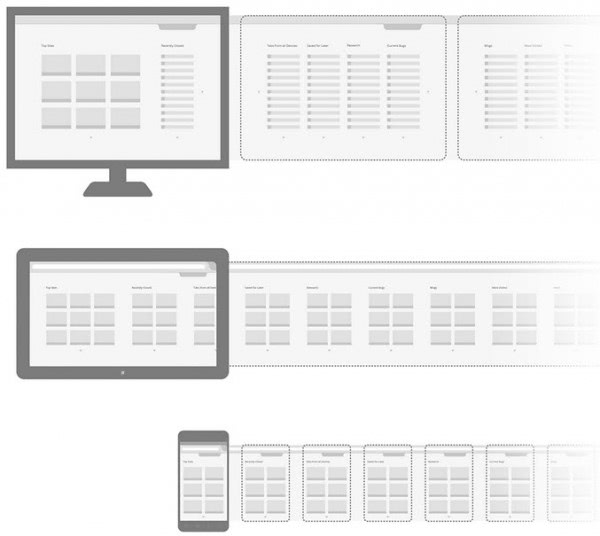 On each instance of Firefox, a user will see the sites most likely to be useful to them grouped into categories. These categories will include recently closed, recently bookmarked, history, etc.

Firefox itself, regardless of device, will have a default list of site categories that is determined by its chance of being useful to the broad swathe of users. For instance, the first category will be top sites, meaning those with the highest frequency score. The order of subsequent categories will be in order of decreasing usefulness.

Any device Firefox runs in will have present these categories in consistent behavior and layout. For users who have not logged into Firefox on multiple decides, the categories will always default to the same order. Scrolling to the right on every devices shows additional categories, while scrolling down on one category maximizes it. This means that even if a user has no Firefox account, they can use muscle memory to find the category they want, even across devices.

The differences between devices are dependent only on the devices themselves: touch vs click, small screen vs large. On desktop, all categories past top sites will be shown in list form, while on tablets and mobile devices only thumbnails will be shown.

In keeping with the Sandstone Mozilla style, a "supertab" at the top right of all new tabs on all devices will allow a user to access additional items and customizations.

Things get interesting once a user has a Firefox account. Then, all of the devices they log into will keep the same categories with the same sites in the same order, and muscle memory will increase further.

The following screenshot highlights how web notifications will be displayed to the user in the browser.

The next mockup shows how the Metro version of Firefox on Windows 8 handles bookmarks. Probably the biggest change here is that you can't create subfolders anymore, as everything is handled in root and the folders there. 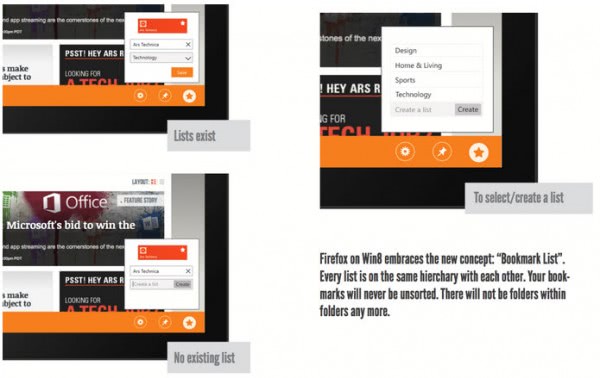 Developers may want to take a look at the following video that is highlighting some of the changes coming to Firefox's developer tools.

What's your take on the proposed changes? Seen anything you like, dislike or are impartial to? (via SÃ¶ren Hentschel)