Want some numbers? Microsoft's Internet Explorer blocked 94% of general malware and 96.6% of click fraud the researchers threw at the browser. All other browsers performed a lot worse in the test.

Google Chrome, which came second in both tests, blocked only 27.6% of malware and only 1.6% of click fraud.

Internet Explorer's SmartScreen technology was highly effective in blocking a large percentage of malware and click fraud on day one of release. The security feature is enabled by default in the browser and runs also on the underlying Windows system. Users may have noticed its Windows protected your PC prompts before.

Chrome's performance is better than that of Firefox and Safari thanks to is malicious download module which blocks downloads that it considers to be malicious.

As far as click fraud goes it is not that relevant to end users as it is affecting advertisers and webmasters directly. It basically revolves around generating clicks on ads with the sole intention of driving the revenue of a site or network up. In this particular study, only click fraud urls were monitored. The researchers noted that users sometimes were infected with malware as a by-product of click fraud. 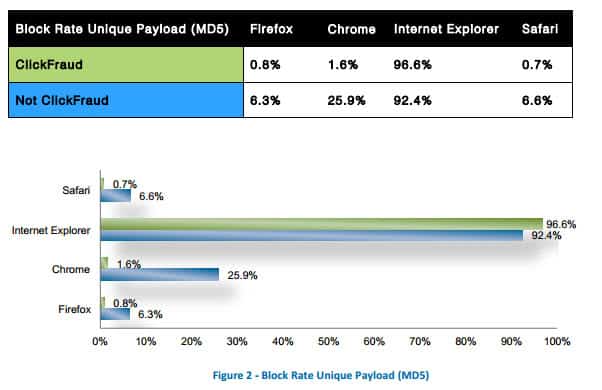 Update: Both documents are no longer available.

NSS Labs in the past accepted sponsorships to conduct studies. For this particular study, no such sponsorship was accepted according to the company.

Browsers like Firefox or Google Chrome offer extensions that add protection to the browser. Add-ons like NoScript or Adblocker would likely have improved the efficiency when it comes to malware and click fraud blocking in browsers.

It is still interesting to see how well Internet Explorer performed in the test. While this won't convince me to make the browser my default, it should be reassuring to Windows users who work with the browser on a day to day basis.

Martin Brinkmann is a journalist from Germany who founded Ghacks Technology News Back in 2005. He is passionate about all things tech and knows the Internet and computers like the back of his hand. You can follow Martin on Facebook or Twitter
View all posts by Martin Brinkmann →
Previous Post: « New Mozilla design mockups [September 2012]
Next Post: Automatically sort Firefox bookmarks »