Taking full screen screenshots has always been an easy process in the Windows operating system. Just hit the print key and the current screen is saved to the Clipboard, from where you can be paste into an image editor to edit and finally save it. Screenshot software for Windows usually optimizes the process in two ways: most programs allow you to save screenshots automatically once you tap on the print screen, and also offer to capture only part of the screen, or even elements that are not visible. The latter may include a window, a scrolling web page, a rectangular block, or even a freehand option.

While I'm using the commercial SnagIt software for the screenshot taking,there are great freeware alternatives like Screenshot Captor that you can make use of instead.

The Open Source tool Live Capture is another alternative that ticks all the right boxes. The portable program fits nicely on an USB Flash Drive for instance or any location that you put it into on your computer. It tries to register a number of shortcuts on first start that includes the print key for full screen image taking.

What you will find out soon thereafter is that it is versatile when it comes to the supported screenshot taking options. Next to full screen captures you find standard options to capture the active window or a rectangular area, but also options that you do not see that often. This includes the previously mentioned freehand capturing, the capturing of program menus and an auto scroll capturing option. 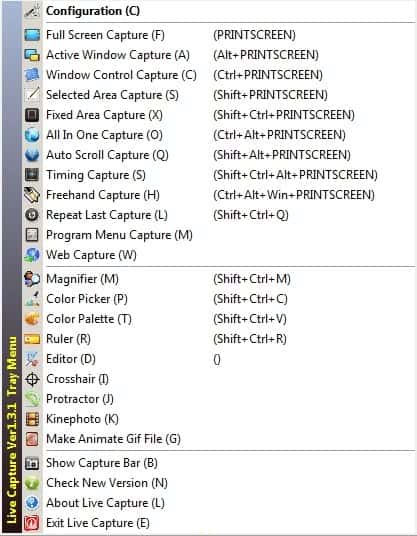 You can make the selection either with a right-click on the program's context menu icon to bring up the menu that you see on the screenshot above, or memorize the relevant keyboard shortcuts to trigger the functionality right away. All shortcuts can be changed in the program options in case they conflict with existing software or when you prefer to map them differently. Here you can also select to automatically save created screenshots to a location of your choosing, configure whether you'd like the pictures to be saved as png, jpg, gif or bmp files and in which quality, define the output file name, send the screenshot directly to a third party program, a printer, or upload it via ftp to a server.

The program lacks editing options but can be configured to send the screenshot directly to the default image editor for the selected output file type. And since you can configure the program to automatically open it in the editor, you do not really have that much of a delay in comparison to SnagIt or comparable software that includes an internal editor.

Live Capture ships with several bonus tools that are marginally related to the program's core functionality. You can display a ruler on screen, magnify portion of the screen or use the color picker tool. Additional tools include a program to create animated gifs (out of static gif images) which can be combined with the program's ability to save captures as gif images.

Probably the biggest issue that I noticed during tests was that there was a noticeable delay between the capturing process and the opening of the save window. It usually took a second or two before the window was displayed and during that time I often asked myself whether the capturing process had been registered correctly by the application. Changing the option to automatically save the screen capture did improve the process considerably and the process more or less happened instantly from then on.

Another issue is that the scrolling capture seems to be broken in the release, as it is not working at all when you select the feature.

If you are looking for a versatile screen capturing software for Windows you may want to take Live Capture for a test ride. The program has a few issues which you can however work around most of the time (with the exception of the scrolling window issue).