Most computer users know that they can take a screenshot of the screen with a tap on the print key on their keyboard. And while that's sometimes all they need, it is often not the most comfortable or practicable solution. This is especially true if you only need a screenshot of a program window or part of the desktop. With print, you'd have to load the screenshot in an image editor to cut, edit and save it before you can add it to your content.

Screen capturing applications like SnagIt improve the process significantly. The program hijacks the print key functionality to provide users with powerful screen taking options. It is still possible to take a screenshot of the whole page, but also of a single window, a region on the screen, free hand, of scrolling windows or menus that are often hard to capture due to their auto closing. But SnagIt's functionality does not end here. Techsmith have added text and video capturing capabilities and many specialized modes and options to the program as well.

All-in-one is the main screenshot taking mode as it allows you to take all kinds of screenshots without switching to a specific capturing profile. You can use it to capture the whole screen, a window or a region. Sometimes though you may want to switch to another capturing mode which you can do in the main program window.

You can pick a mode from the profiles offered in the main interface, or from the Input dropdown menu presented under Profile Settings. Specialized modes, for instance to capture DirectX, full screen DOS or custom scrolling regions are available for selection. Output settings, effects and options are configured here as well. You can save screenshots directly to the system or on an ftp server, send it to the printer, attach it to an email, save it in the Clipboard or open it in the built-in editor.

Options finally can be used to hide or display the mouse cursor on the screen, configure timed captures or preview the image in the editor.

New capturing profiles can be saved in the program. They appear under Profiles for quick selection.

Once configured, you take screenshots as fast as you would with the operating system's default print key feature.

Snagit Editor can be used to edit screenshots before they are saved to the system. The program supports basic image editing options that include cropping, resizing or cutting images, adding text or lines, but also specialized options that are highly useful in regards to screenshots. These include highlighting screen areas, blurring information, adding watermarks, and effects like shadows or borders.

SnagIt keeps track of all screenshots automatically in a library as long as they are not deleted on the system. This combined with the program's tagging improves the manageability of past screenshots.

The programs functionality does not end here though. You can install so called accessories that add functionality to the program. Accessories are available to instantly push screenshots to WordPress, Moveable Type or Type Pad blogs, to Skype, Flickr or Microsoft Office documents to optimize the workflow further.

SnagIt supports three additional capturing options. Text capture works like an OCR tool that reads text displayed in images or dialog boxes into text that you can copy and paste.

Web Capture allows you to capture all images that are displayed on a web page. You do however need to input the url directly to use the feature.

Video capture finally can be used to record screen activities. This is more or less a lightweight version of Techsmith's Camtasia screen recording and production software.

The module can record a single window, a region on the screen, or all of the desktop. It is optionally possible to include audio and the cursor movement in the video. Videos can only be saved as avi files.

Camtasia Studio is to video recording what SnagIt is to screen capturing. The program is an all-in-one solution for all video capturing needs on the desktop. It supports recording video and audio off the screen. Options are provided to create full screen recordings, recordings of individual windows, regions of the screen or directly from a connected web cam.

Camtasia Recorder is the small frontend program that you can use to start captures with a single-click of the mouse.

The most important configuration options are listed in the program window. You can select the video and audio source, and configure the recordings in detail. One interesting option is the lock to application feature. This basically links a window to the recording with the effect that recording dimensions are automatically applied to the window (the window is automatically resized by Camtasia). That's useful if you want to record in a specific resolution.

Recorded videos are played in a preview window automatically once the capturing is stopped. Here it is possible to delete the video, save it as an avi file directly or send it to Camtasia Studio.

You can change the editing dimensions on the first screen in Camtasia Studio or keep the original size of the recording. Once done you can start editing and producing the video. 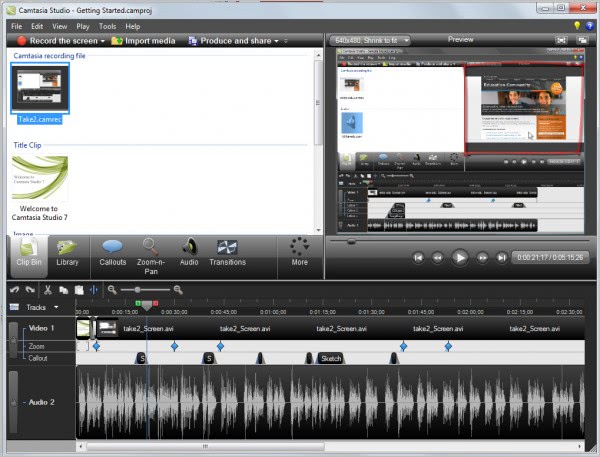 This includes adding additional clips to the video, cutting or splitting videos, adding callouts that highlight areas in the video, or making changes to the audio recording (volume leveling, voice optimization).

Additional features allow you to add captions, use the picture in picture option to display a smaller video in the video that you have recorded, record audio, transition effects, and to add title clips to the video.

Especially the option to record audio directly from within the editor is useful for users who like to create screencasts or tutorial videos. Instead of having to talk and demonstrate at the same time, it is now possible to capture the video first, and add the audio later on in the processing phase.

Videos can be saved in various formats. Camtasia Studio supports saving videos for Blogs, YouTube, HD and DVD and mobile devices such as iPhones. Presets can be edited or created, which works similar to SnagIts profile feature.

Camtasia MenuMaker can be used to create menus to launch created videos automatically. This can be handy for video DVDs for instance.

SnagIt is a professional screen capturing software that leaves little to be desired. Workflows can be automated and optimized to an extend that the majority of comparable tools do not support.

Camtasia Studio can be used to create professional video screencasts, tutorials and demonstrations, and handles everything from the first second of recording to editing and production.

Both programs, despite their professional grade functionality, are easy to use and handle. Techsmith offers video instructions on their website for both programs.

Unrestricted 30-day trial versions are available for both programs on the developer website.

We have 4 SnagIt licenses and 2 Camtasia Studio licenses for this giveaway. Leave a comment below and let us know what you like to do with the programs if you win a license. Winners are then drawn from all comments.