Fix Steam Error Could Not Connect To Steam Network

Today while I was starting Steam on my gaming rig I received a Steam error message that I had not seen before. It read: Could not connect to Steam network.

This could be due to a problem with your Internet connection, or with the Steam network. Please visit www.steampowered.com for more info.

I tested my Internet connection and it worked just fine. I also knew that Steam started up fine the other night, which made it very unlikely that the issue was caused by a setting or program on my PC.

Fixing Could Not Connect To Steam Network

When this happens, and Steam used to work previously and you have not made any significant changes to your system, like installing a new firewall or antivirus, then it is likely that it is either an error on Valve's side, or a corrupt file caused during the last shutdown of the system.

One of the things that you can do is delete local Steam files to have the software re-download them during connection. You need to be careful with the files and folders that you delete though, as you would not want to delete your gaming folder with the download games for instance.

You basically can delete all files except Steam.exe and the steamapps folder. This is what Valve suggests users to do in this case.

Please exit Steam and go to the folder called C:\Program Files\Steam\ (this is the default location for a Steam installation - if you set a different installation directory, you will need to browse to it).

Delete all of the files in this folder except:

The \Steamapps\ folder and Steam.exe (this file is listed as an application and features the black and white Steam logo)

Then, launch Steam.exe from within the Steam installation folder, and not from a pre-existing shortcut.

Keep in mind that you have to log in to Steam again if you delete all the local files, and that Steam may furthermore pick up the PC as a new computer which requires extra validation. 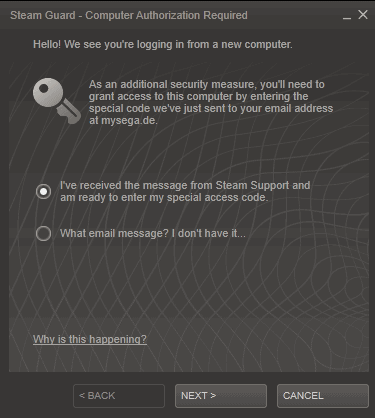 Valve basically sends a verification code to the primary account email address that you need to enter before you can complete the sign in.

If deleting the local game contents did not work, you could try and re-install Steam instead. I personally would not get my hopes up to high, as it basically has the same effect as deleting the majority of files in the Steam folder so that they are retrieved from the Steam servers again. Chance is, if the former did not work, this won't work as well.

If you have a second PC, you can try the Steam connection there, just to test it out. If it is not working as well, it could indicate a issue either with your Internet connection, or with Steam servers.

If you have installed new software, or updated software, since the last successful connection to Steam, you may want to check and see if the installation or update is causing the connectivity issues.

I suggest you start at the official Steam Knowledgebase, which has an application listing of programs that may interfere with your Steam connection. Here you find antivirus and firewall applications, as well as DVD emulation software, download accelerators and other apps that may cause the issues.

If it is a Steam server issue, there is not really a lot that you can do on your side to get it fixed. In some cases though, you can work your way around then. Since yesterday for instance, Steam is reporting that some European users, especially from Germany, can't connect to Steam anymore. Changing the IP address, for instance with the help of a Virtual Private Network, can resolve the issue right away until it is fixed by Valve.

You can also contact support on the Steam support website, but I would not get my hopes up receiving a timely response.The forums on the other hand are a good place to start as you can get an indication of the problem's reach. If you see dozens or hundreds of users with the same issue, you can be almost certain that the connection problems are Steam server related. If you seem to be the only user, it is more likely on your side.