If you are a regular reader you know that I'm currently using the Java based desktop rss reader RSSOwl for all my rss feed reading needs. It is a great program and I usually would not have the desire to move away from it, where it not for the fact that it is based on Java, and the only reason that I still have Java installed on the system.

While researching rss reader alternatives for the Windows desktop I noticed that there were not a lot that were still updated regularly. And some that were, were simply to slow performance-wise and could not keep up with the number of feeds and the updating that I needed.

With that in mind, I found two candidates to replace RSSOwl as my main rss reader. I've been using both for a while, and have not made a decision yet. They both do not come near the functionality that RSSOwl offers, but since my main focus is feed reading, I'm not that worried about it.

GreatNews has a tiny download size of 1 Megabyte, and is available as a setup and portable version. It can import OPML files which you can generate in most rss readers, including RSSOwl or Google Reader. It requires more configuration than the second RSS reader application that I take a look at later in this article.

The first thing that you may want to do is to import your feeds under Tools > Import Feeds from OPML/XML. The feeds are then automatically added and updated. The default layout may look quite confusing, as the app is displaying multiple feed posts on a single page.

A click on Tools > Options > Reading displays options to change that. I for one have reduced the items per page to 1. You may also want to display the feed title listing at the top, which you can do with a click on the blue bar at the top of the screen. 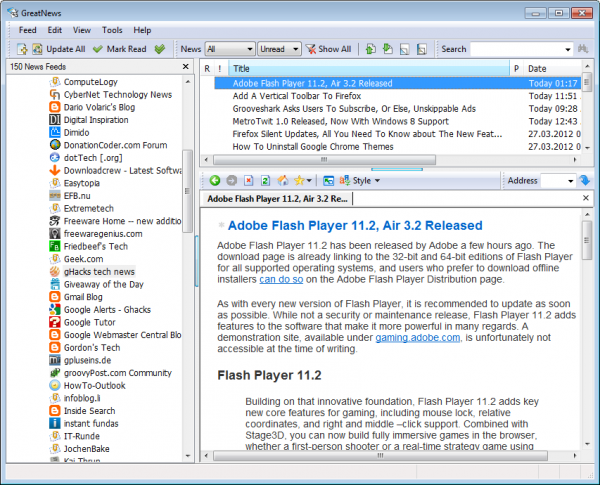 The information can be displayed in the standard three pane layout that is listing the rss feed listing on the left, the article titles on the top right, and the selected message on the bottom right. Another interesting feature is the ability to switch between different message styles.

Updating is as fast as the feed updating in RSSOwl, as is navigating in the feed listings and the updating of contents.Â  The functionality that I need, marking new posts as read when they are activated, great performance, and options to open links in the web browser are all there.

The second RSS reader is a basic reader, which is not necessarily a bad thing to begin with. You can again import your feeds from an OPML file that you have created previously from your current rss feed reader. 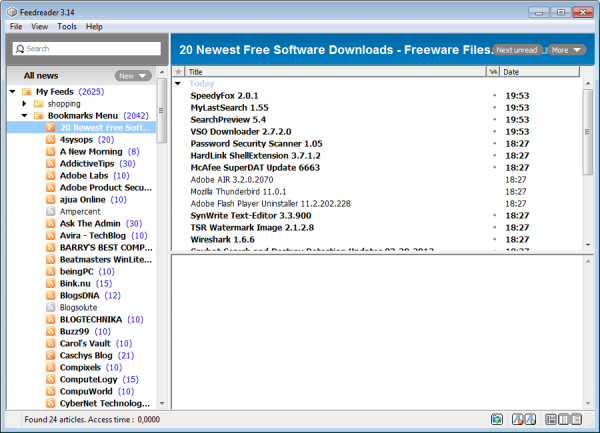 It features the same messaging layout with the rss feed listing on the left, the titles and messages on the right. The font used by the application feels to light for my taste, with no options available to switch to a different font in the program.

FeedReader is pretty fast as well, and while it does not have that many features, it still is pretty good when it comes to reading RSS feeds.If there is one thing to criticize, it is the slow closing time of the app.

Update: Keyboard shortcuts are listed on this page. (thanks Rob)

I'm currently leaning more towards GreatNews, as it feels like a complete package. I also find it to be a tad faster than FeedReader. It is likely that I will switch my rss feed reading to that app in the near future.

I could not find any information about keyboard shortcuts in both readers. Not sure if there are not any, or if they are not just not listed in the program.

Are you using a different desktop feed reader for Windows? If so, what is your program of choice and why?