I have been using the open source encryption software TrueCrypt for a long time to keep my data secure on connected hard drives. The program has evolved over the years, and can now create encrypted file containers, encrypt full partitions and even the whole computer system.

TrueCrypt is that solid that its developers need to update it only once or twice a year. The last update dates back to September 2011 where support for Mac OS X 10.7 Lion was added to the application, and the update before that was almost a year before that.

Yesterday the first 2012 update was released. The change log over at the TrueCrypt website lists minor improvements and bug fixes as the only changes in TrueCrypt 7.1a. It does not go into further detail, other than stating that these have been applied to all supported operating systems.

TrueCrypt users can download the latest version of the application from the official project website. You need to close all TrueCrypt instances running on the system before the update can be installed. 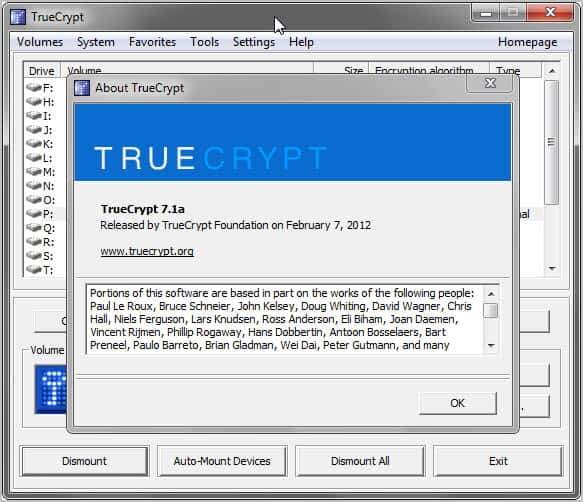 Should you install the update if you are running a version of TrueCrypt that is not causing problems or issues on your system? I'd say you may still want to update to TrueCrypt 7.1a, considering that the update may have resolved rare bugs that you might experience in the future if you do not apply the update.

If you are a new TrueCrypt user you may be interested in our collection of TrueCrypt tutorials that we have published over the years. Here is a short selection of guides to get you started:

Are you a TrueCrypt user, or do you prefer a different encryption software? (via Caschy)