Remember TweetDeck, the Adobe Air Twitter client that offered better faster access to all things Twitter? Adobe Air was not the only platform TweetDeck was offered on. A web based version and Google Chrome application were offered as well by the developers.

Those rumors have now been refuted with the release of native TweetDeck clients for Windows and Mac operating systems. The Adobe Air client is no longer available on the official site, and it seems as if the developers have moved away from it completely.

The move has not been officially announced yet, while desktop clients are already offered on the official TweetDeck website. 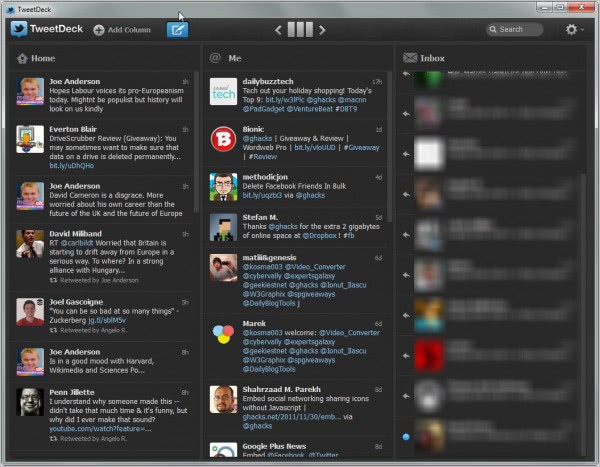 Users can start connecting their Twitter and Facebook accounts once the software has been installed on their system. The three columns Home, Me and Inbox are displayed by default. If you have followed yesterday's news about the upcoming Twitter relaunch you know that this is the new Twitter terminology and layout (only discover is missing).

A click on Add Column displays additional data streams that can be added to the TweetDeck interface. This includes lists, trends, tweets, favorites and search results. The program displays configuration options. If you want to add a search column, you are asked to enter either a hashtag or keyword.

A new option is the notification option. A click on a column's settings button opens a menu with options to enable notification sounds or popups.

Not everything is golden though. Several features of the Adobe Air client went awol in the first desktop version. Different column sizes, color schemes or keyboard shortcuts are nowhere to be found in the native client versions of TweetDeck.

It is not clear if the features have been removed intentionally from the client, or removed because of time limitations to meet yesterday's redesign deadline. (via Caschy)