Why Is Twitterâ€™s Acquisition of TweetDeck More Than It Seems?

This week saw the acquisition of TweetDeck by Twitter for $40-$50 million. Yay for Twitter, right? Theyâ€™ve gotten access to a popular and functional client. But why TweetDeck, and why now? Well, thatâ€™s quite a story.

With the acquisition of TweetDeck, Twitter is getting hold of a popular Twitter client. Itâ€™s got versions for the iPhone, Android, PC desktops via Adobe Air and a Chrome plug-in. Not only does it provide access to Twitter, but also to Facebook, Foursquare, LinkedIn and Google Buzz, among others. 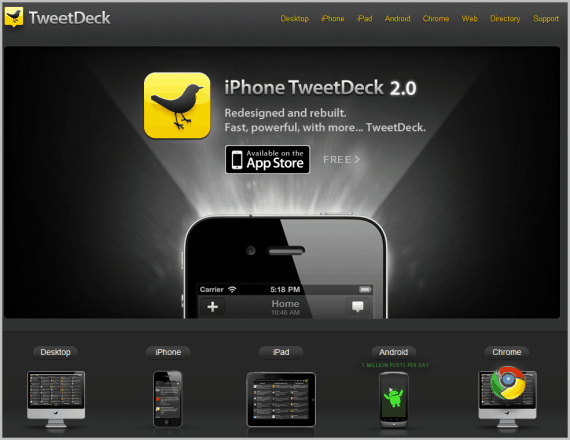 But Twitter might have had ideas other than just acquiring a popular client. You see, back in February it was leaked that Uber Media was going to buy TweetDeck. The deal was supposed to be for $25-$30 million. But neither party released official statements. One source says there was a 30 day exclusive, but it passed because the negotiations dragged out too long.

Uber Media owns several other Twitter clients. Had it been able to purchase TweetDeck, it would have had over 20% of the active Twitter users. Many of those would have been some of the most influential Twitter users from media, celebrities and blogs.

Taking all of this into account, it becomes clear why the acquisition of TweetDeck by Uber Media would not have been a really good thing for Twitter. This would have placed Uber Media between Twitter and many of the most active and influential Twitter users. Uber might have made a bid to control some of the ads that are Twitterâ€™s income. Also, acquiring TweetDeck might have given Uber Media enough of an active user base of its own for its rumored Twitter competitor.

That is why itâ€™s so interesting that three months later, Twitter is purchasing TweetDeck for almost twice the offering price of Uber Media. Iâ€™d have loved to be a fly on the wall during those negotiations.

The question now is what, exactly is Twitter going to do with TweetDeck? Many are saying the company will kill it. In March, Twitter released a statement to developers encouraging them not to create clients that duplicated Twitter functionality. This was rather a slap in the face for many client developers, who helped the microblogging platform get popular in the first place. So, Twitter may kill TweetDeck just to â€œmake things less confusingâ€ for users. Also, Twitter has shown no interest at all in supporting Facebook, Foursquare or any of the other platforms that TweetDeck supports. Since the functionality of TweetDeck could pretty easily be worked into Twitter, they really have no need for the client itself, but would see benefit in getting rid of a potential competitor platform.

In this case, it seems that Twitterâ€™s acquisition of TweetDeck is purely defensive. It wants to keep a powerful tool out of the hands of someone who doesnâ€™t necessarily have Twitterâ€™s best interests at heart.
What do you think? Do you use TweetDeck? Do you like it? Does it add anything to the Twitter experience? What do you think Twitter will do with it?

Previous Post: « How Did You Hear About Osama? I Bet It Wasnâ€™t On TV...
Next Post: « BurnBit, Create Torrents From Any File Hosted On The Internet