Eraser Has Stopped Working, Fix Inside

For a while now I received an error message whenever I tried to run the file deletion software Eraser. Eraser, which I reviewed in 2005 for the first time here on Ghacks (see Securely Delete Files), can delete files so that they are not recoverable anymore on the system. When you delete files regularly in Windows they are not really deleted from the hard drive. First, they are moved to the Windows trash by default from where they are easily recoverable. When users delete files from the trash they are still not removed completely from the system.

The operating system basically deletes the files information from the system while leaving the file itself on the storage device. File recovery software like Undelete Plus, Pandora Recovery or Recuva may restore those files. Windows will use the storage space of the deleted files eventually which means that they will eventually become partially and then fully unrecoverable.

Eraser on the other hand speeds up that process by overwriting the entire space a file occupied on the computer's hard drive. Once done it is no longer possible to recover the file with file recovery software or other means. 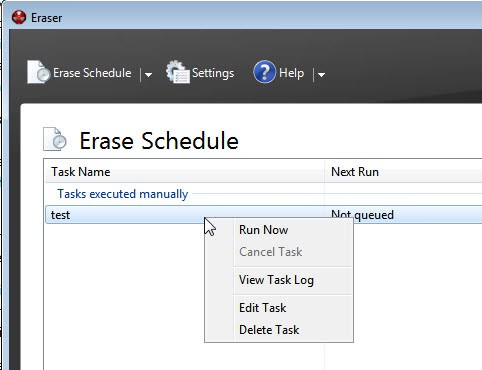 For some time now I received the error message "Eraser has stopped working" when trying to start the software. Running the software with administrative privileges, from the context menu or in compatibility mode did not resolve the issue.

Uninstallation and re-installation of Eraser did not resolve the issue either. Then I discovered that Eraser was using a folder in the application directory, and that the file Task List.ersx was in that folder. The path of the Eraser folder is C:\Users\Martin\AppData\Local\Eraser 6 under 64-bit editions of Windows 7.

Made a backup first and deleted the file afterwards from the folder. After that, Eraser was starting up just fine without error message or other issues.

Windows users who are receiving the "Eraser has stopped working" error when trying to start the program should check the application directory to see if it too contains a Task List.ersx file and if it does, delete it to resolve the issue.

Previous Post: « Notepad++ Not Starting Up? Try Disabling Plugins
Next Post: How To Disable The Caps Lock Key Permanently »