One would think that there should be at least some free working tools for the Windows operating system that allow users to scan if drivers installed on the computer system are up to date or need updating.

A user searching for terms like Windows driver updates or driver updates will most likely be disappointed as the top spots are held by commercial products that sometimes promise a free scan but require registration and purchase before the drivers can be downloaded.

There is not really a lot of choice when it comes to free solutions which could be explained by the sheer volume of hardware devices and drivers which require a huge database that gets updated hundreds of times a day. Probably too much work for a group of individuals but excellent for a community project. 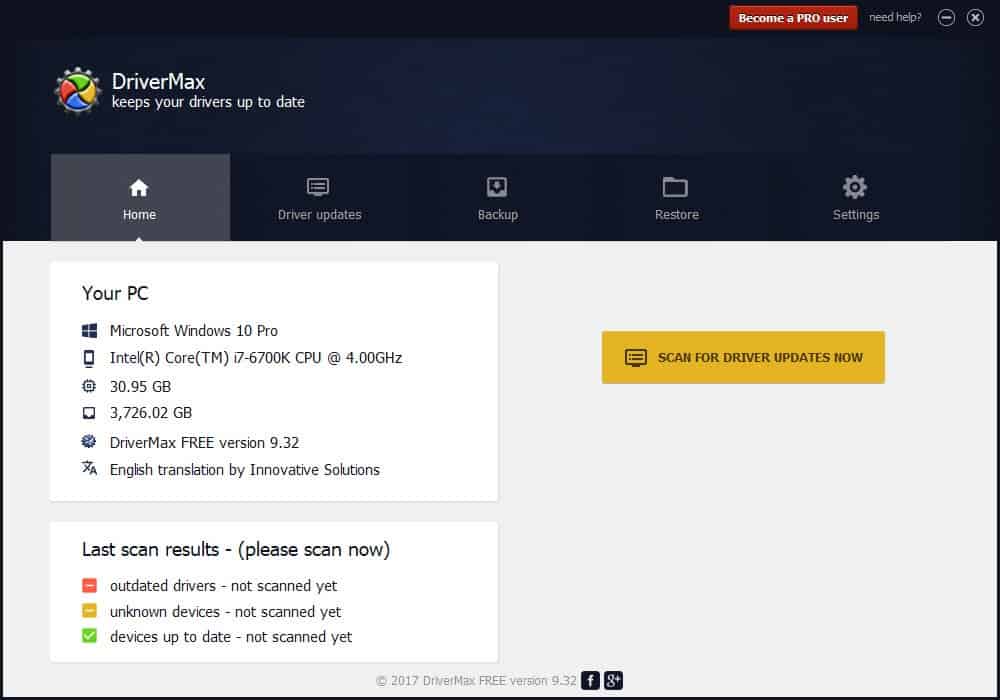 Anyway, some free programs to update Windows drivers exist. We have reviewed Driver Max in the past. The application has made some leaps version wise. It can not only be used to scan for Windows driver updates but also to identify unknown hardware or to perform device driver backups.

Update: DriverMax is available as a limited free version, and a commercial pro version. The free version is limited in regards to driver downloads, scan intervals, and more.

A click on the scan for driver updates button starts the scan of the local system and connected hardware devices.

The scan is fast and requires an Internet connection as information is pulled from the DriverMax servers. The application lists all detected hardware devices in the program interface, and whether updates are available for each of them.

Colors are used to highlight this as well in the interface, with red indicating that the driver is out of date, and green that it is up to date.

Driver Max lists the name of the hardware device, and the driver version. You can move the cursor over any device to select the information icon to display additional information including the old and new driver version, and release dates.

Updates can be ignored, or downloaded and installed from within the software program. It is suggested that you create a backup before you run any driver updates. You can use DriverMax for that, as it ships with that functionality, or use other backup means instead.

DriverMax is configured to check for driver updates every day. You can change that to week or month, and also change the time of day the checks are made. There is also an option to have the program download driver updates automatically if detected.

Another useful feature is the ability to ignore devices in the checks. If you notice false positives for instance, or don't want to update a particular device, then this is your best option to prevent new drivers from being downloaded and installed.

A similar program is 3DP Chip (read: Computer Driver Updates) which will only scan the most important components of a computer system.

DriverMax is a handy program for Windows to check for driver updates and download them. The free version is somewhat limited, but scans are not really. This means that you can use the information even if downloads are not available at the time.

Martin Brinkmann is a journalist from Germany who founded Ghacks Technology News Back in 2005. He is passionate about all things tech and knows the Internet and computers like the back of his hand. You can follow Martin on Facebook or Twitter
View all posts by Martin Brinkmann →
Previous Post: « Launch any app or folder with a hotkey using PS Hot Launch
Next Post: Sort Files Folders Automatically »