PS Hot Launch VVL is a free launcher application for Windows that lets you start any app or folder with the tap on a hotkey.

I use a lot of applications and now that Launchy is so great I can do this relatively quickly. However, there is another app that allows even simpler launching, and not just for applications, but for folders, text files, anything you need. PS Hot Launch VVL is an applications that lets you bind any application, any folder or file to a hotkey, using that key to launch it any time anywhere.

Residing in your system tray, PS Hot Launch can act as a sort of replacement start menu. You can add applications and files to it as if you were creating a menu structure, and then punch it up by clicking on the icon. Far more useful is the hotkey ability though, which I use mostly for folder launching. Just add a folder (or anything else), and toward the bottom of the app you can add a hotkey. I use the windows key + alt, and a letter most of the time, this makes sure I don't conflict with any other hotkeys. 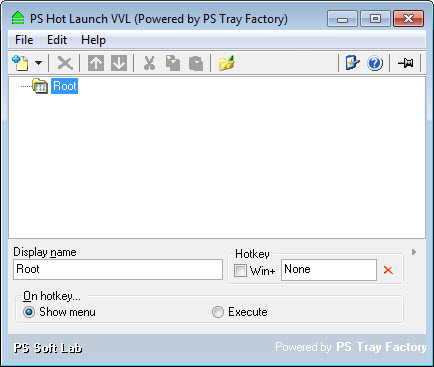 If you use a lot of folders, this applications will be a Godsend! I use quite a lot, since I use Xampp to do web development on my local machine, so i use a lot of directories for websites and such, all of which I can bind to hotkeys. Launching Firefox can also be easier than with Launchy, just press Win+Alt+F for example. That said, Launchy has some benefits of PS Hot Launch, but I use both side by side harmoniously.

The above operations are carried out through the menu that can be called by clicking the program icon in the taskbar system tray, and also by pressing user assigned hot keys (support for the <Win> key significantly extends the number of possible combinations).

PS Hot Launch VVL is a free program for Windows that boosts your productivity by enabling you to load any folder, file or application with hotkeys.