The Rip and Listen buttons can be used to start the recording of the Internet radio station or to listen to it in the embedded player module on the same page.

The Ripper module will display the selected Internet radio station with the option to start the recording. One interesting feature of Musicy os the ability to add multiple Internet radio stations to the ripper which can all be recorded at the same time if the network connection of the computer provides enough bandwidth to do so. 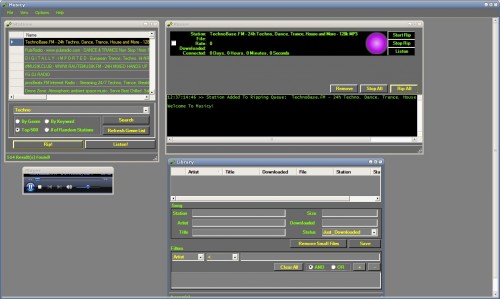 The free Internet radio recorder will display the bitrate, the downloaded Megabytes and the time the computer was connected to each Internet radio station. The total bandwidth that is currently used for the recordings and the size of all downloads is shown in the module's status bar.

Musicy will automatically save the song using the name of the artist and title if the Internet radio station is streaming those information. Musicy Download

Update: The developers have dropped the Musicy project. It is no longer in active development. I suggest you take a look at Streamripper instead which lets you download Internet Radio stations as well, any maybe even better than, Musicy.