Streamripper was released in a new version today and I would like to use the opportunity to explain how you can save Internet Radio tracks using Streamripper. You actually do not need another software to accomplish this because Streamripper can be used from the Windows command line. Lets say you almost need no other software for that because you need to find out a stream url of course. Begin by download the latest version of Streamripper for Windows from Sourceforge.

Once you got that install the software. You might notice the Winamp Plugin which is probably the better way of saving Internet Radio tracks because you can use it from within Winamp that way. Since I'm not using Winamp I favor the command line option. Another option would be to install Winamp and use it just for the purpose of downloading Internet Radio tracks.

I assume you have installed Streamripper and are ready to go. The first thing that we need to do is locate a Internet Radio stream. You can use shoutcast for this for instance which is a directory that contains hundreds, if not thousands, of Internet Radio stations that can be listened to directly with the click of the mouse. 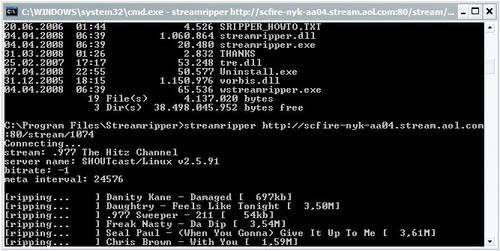 What you need to do to find out the stream url is the following. Right-click the tune in button on the Shoutcast website and select Save Link As from the menu. This will download a .pls file that contains the information that we need. Open the Playlist file in a text editor and locate the line beginning with File1=. The stream url is located in that line.

Now open the Windows command line (Windows R, cmd, enter) and navigate to the directory where Streamripper was installed to. It is located by default in the streamripper folder in program files.

The command to start saving songs from Internet Radio stations is a basic one, it is.

Enter the stream url that you found earlier and Streamripper will automatically begin to download songs to your hard drive. One useful parameter is the -d parameter which defines the directory where the music is saved into.

This would save all songs in e:\music\new\. The major benefit of running Streamripper in command line mode is that you do not need to listen to the music while ripping. It's a bit more complicated than using Winamp or XMPlay but it's probably worth a shot if you have none of these players installed.

If you want to save two streams at the same time you simply open another command line window and use the command with the second url again.