NZXT CAM is a freeware tool that displays a customizable overlay over your game screen - gHacks Tech News
ghacks.net

A long time ago, Fraps used to be the most recommended choice for displaying the frame rate of a game. It has been superseded by many programs that offer additional features and are free on top of that. 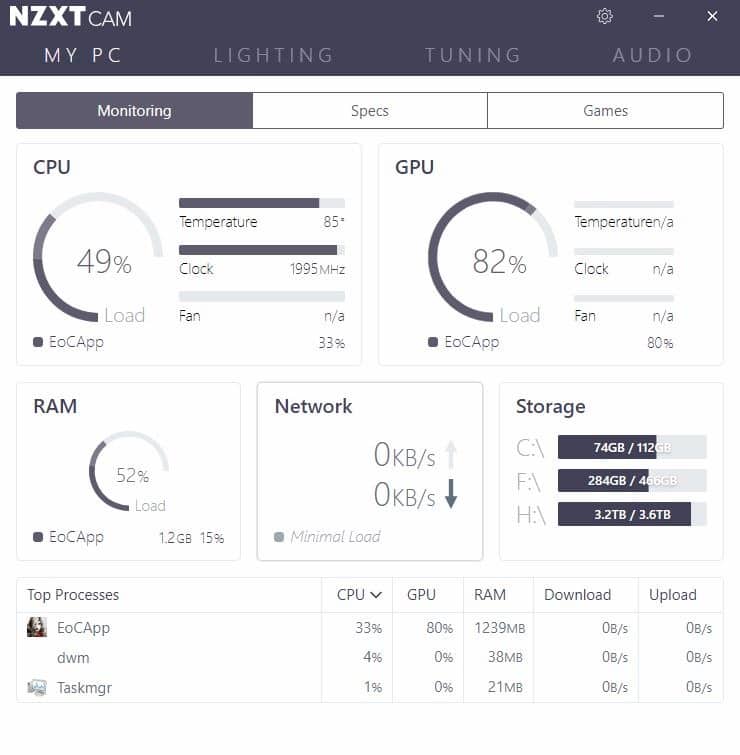 Game clients like Steam, Origin, Uplay offer a built-in setting that you can toggle. These are okay when used sparingly, but aren't the best visually or in terms of customization.

NZXT CAM is a freeware tool that displays a customizable overlay over your game screen. The program's installer is an online downloader, and you can't customize the location where it will be installed. Upon the first run, you'll be prompted to sign in to your NZXT account. This is optional, and there's a guest mode which lets you use the program without an account. 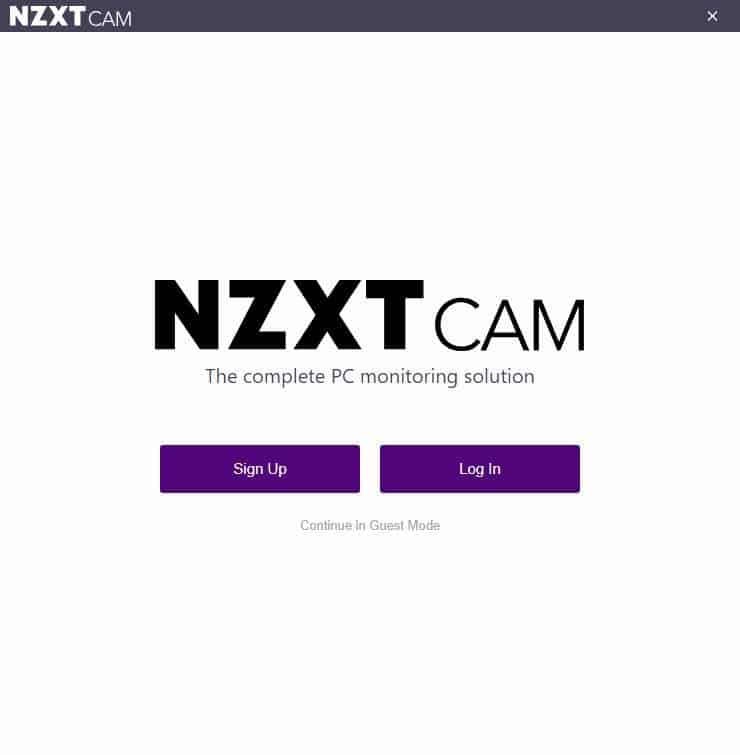 CAM's interface has four primary tabs. Unless you have NZXT hardware, you won't be able to use the Lighting, Tuning and Audio tabs. So, we'll be focusing on the My PC tab. It is divided into three sub-tabs: Monitoring, Specs and games. The monitoring section is the main screen of NZXT CAM's interface.

The CPU pane displays the CPU Load, Temperature level, Clock Frequency and Fan speed. The GPU section to the right displays the same values, but for the graphics card. You can monitor the RAM load, the program that's using the most memory, network usage and storage capacity. The pane at the bottom lists the top processes along with their CPU, GPU, RAM usage and their download and upload speed.

The Specs tab provides you all the technical information about your hardware such as the make and model number of the CPU, GPU, Motherboard, RAM, Storage, Audio, Network Adapters. Click on a component to view more information about it on the right pane, for e.g. selecting the motherboard lists its chipset architecture, bridge, and BIOS info. 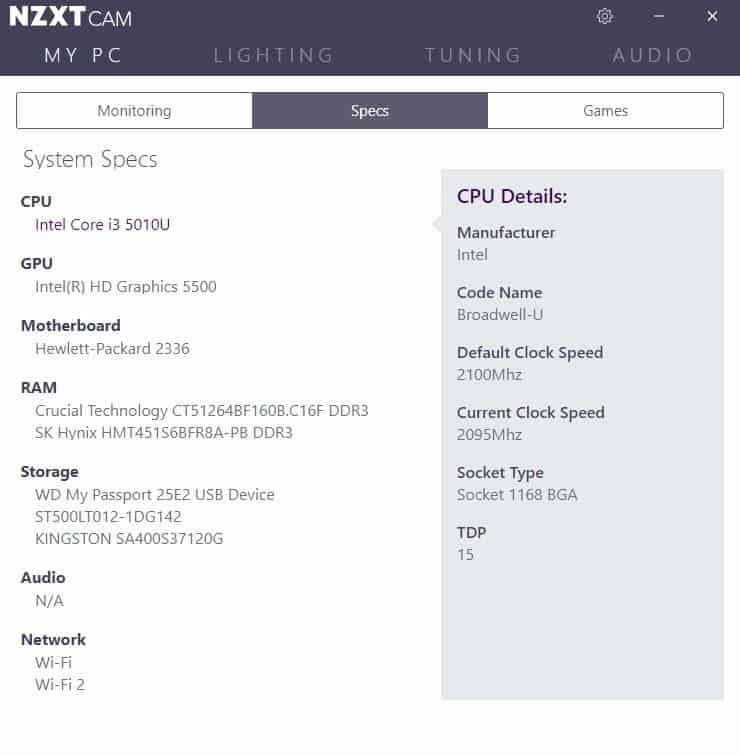 Finally, the Games tab is quite a bit different. It has a timeline that shows you the games you played over the last 7 days (or month/6 months/year), and how long you spent in each game. Every game is displayed in its own color which makes it easier to read. The bottom half of the pane has statistics such as the average frame rate of a game, the total hours you played it for. Click on a game to view its own timeline and some advanced stats like the time below 30 fps, average fps, how long your average session and longest session lasted. 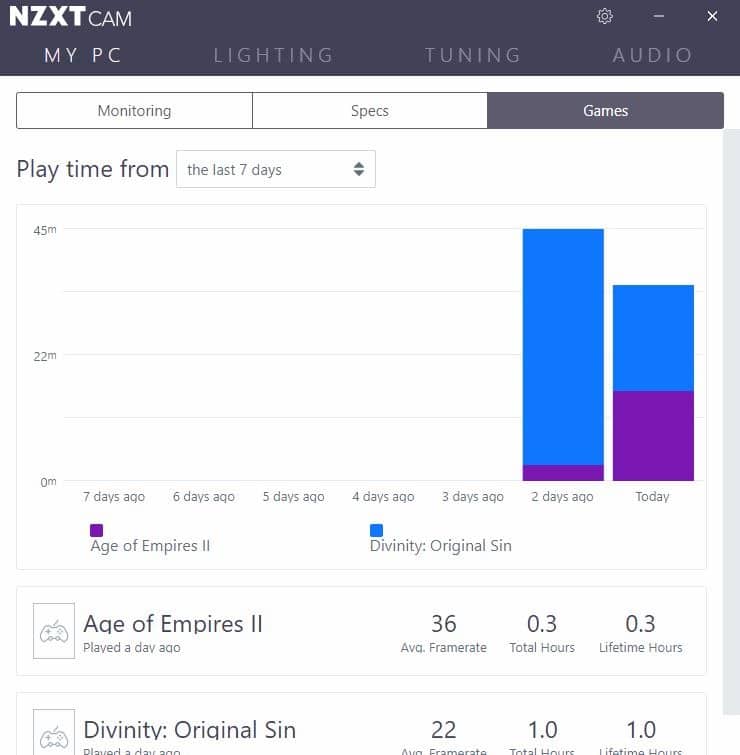 This is probably NZXT CAM's most popular feature. The application displays an on-screen overlay which appears at the top of games that you run. You can enable the overlay using the shortcut Ctrl + O, at anytime. It's a lot more useful than the built-in options in Steam, Uplay and others. 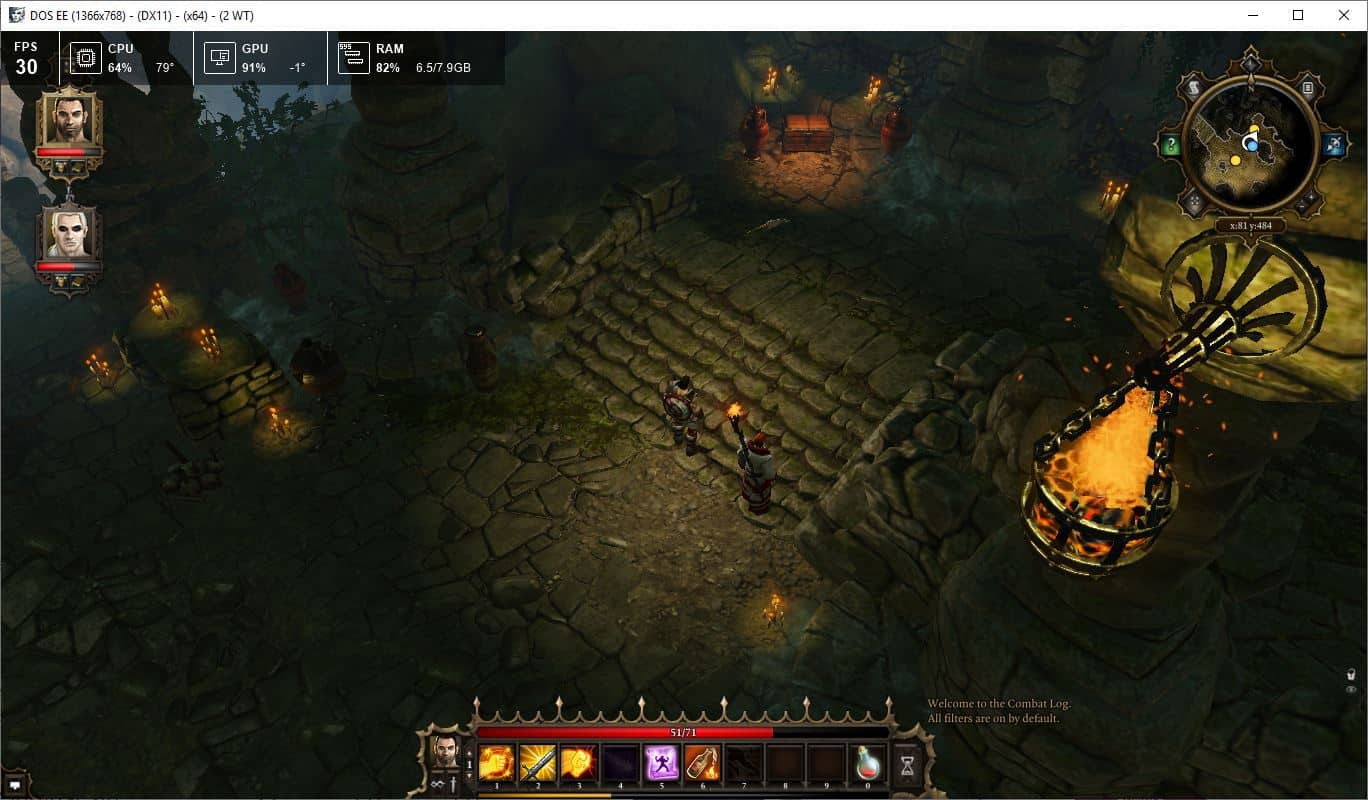 Open the Settings > Overlay page to customize the OSD's panels. The default options are FPS (frames per second), CPU, GPU and RAM. In addition to these, you can enable System time and Network to be displayed in the overlay. These are very useful when you are trying to adjust a game's settings, benchmark the performance, or even if you're overclocking your computer. 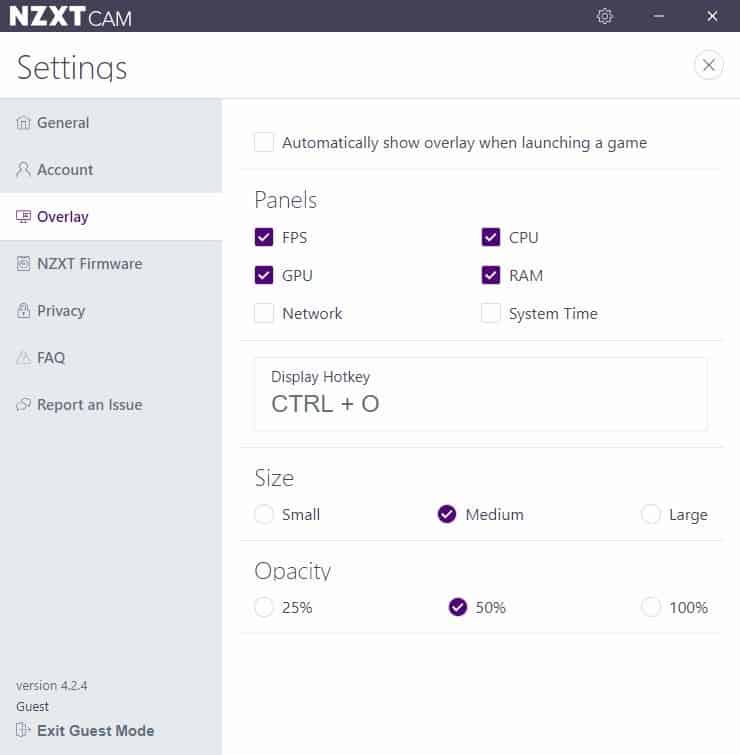 Optionally set the OSD to start automatically when launching a game, though I feel it's kind of pointless because of the hotkey. Speaking of, you may modify the hotkey combination as well. The OSD is of medium size and 50% opaque, but there are options to change these settings.

Note: Hit the larger X button (below the other X), to get back from the Settings screen to the main screen. This is a rather odd design choice. 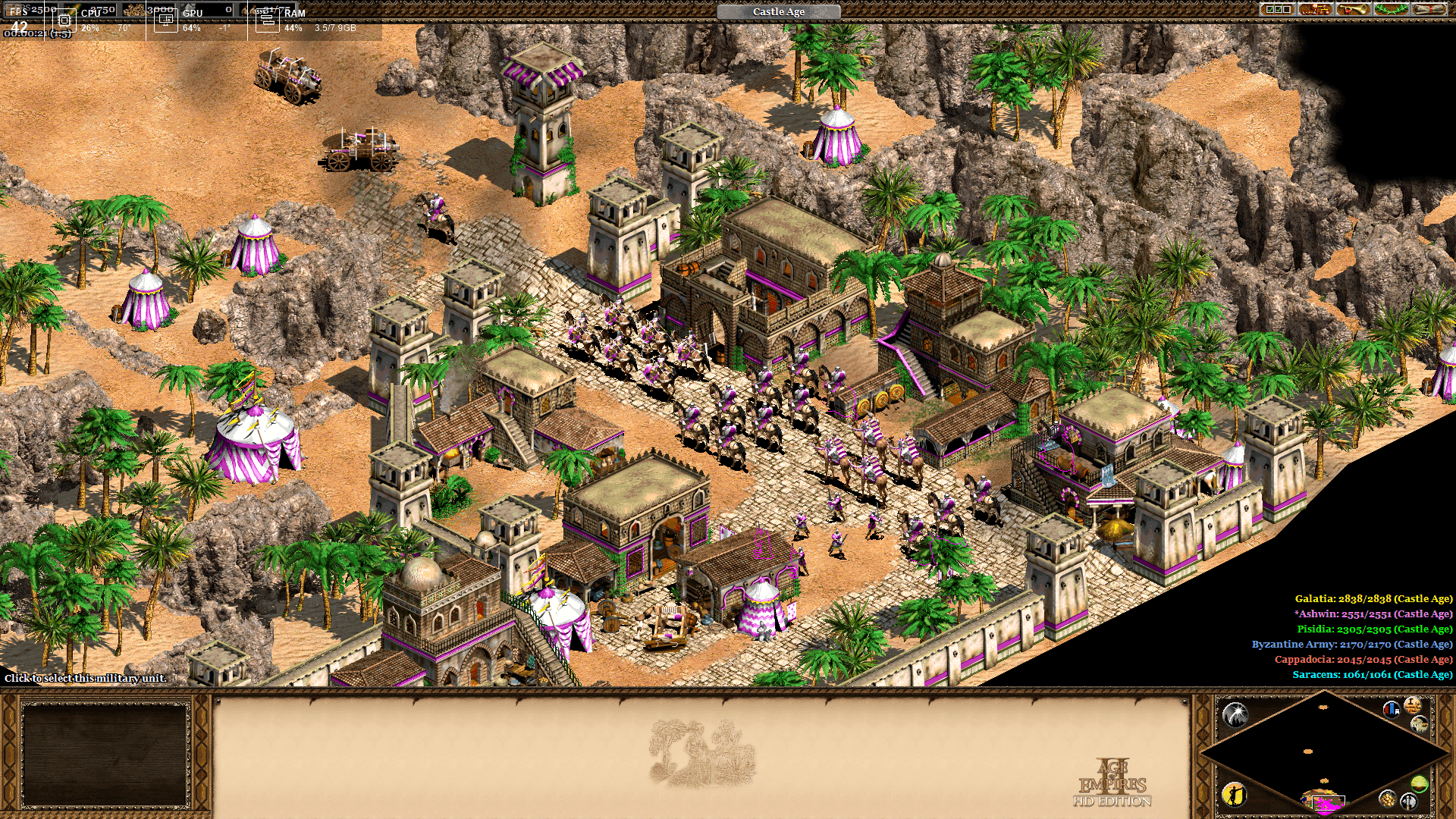 The overlay can be distracting, and in some games it could actually overlap important areas of the screen. Don't worry, you can reposition the overlay by hitting Ctrl + O, and then dragging it to a different part of the screen. 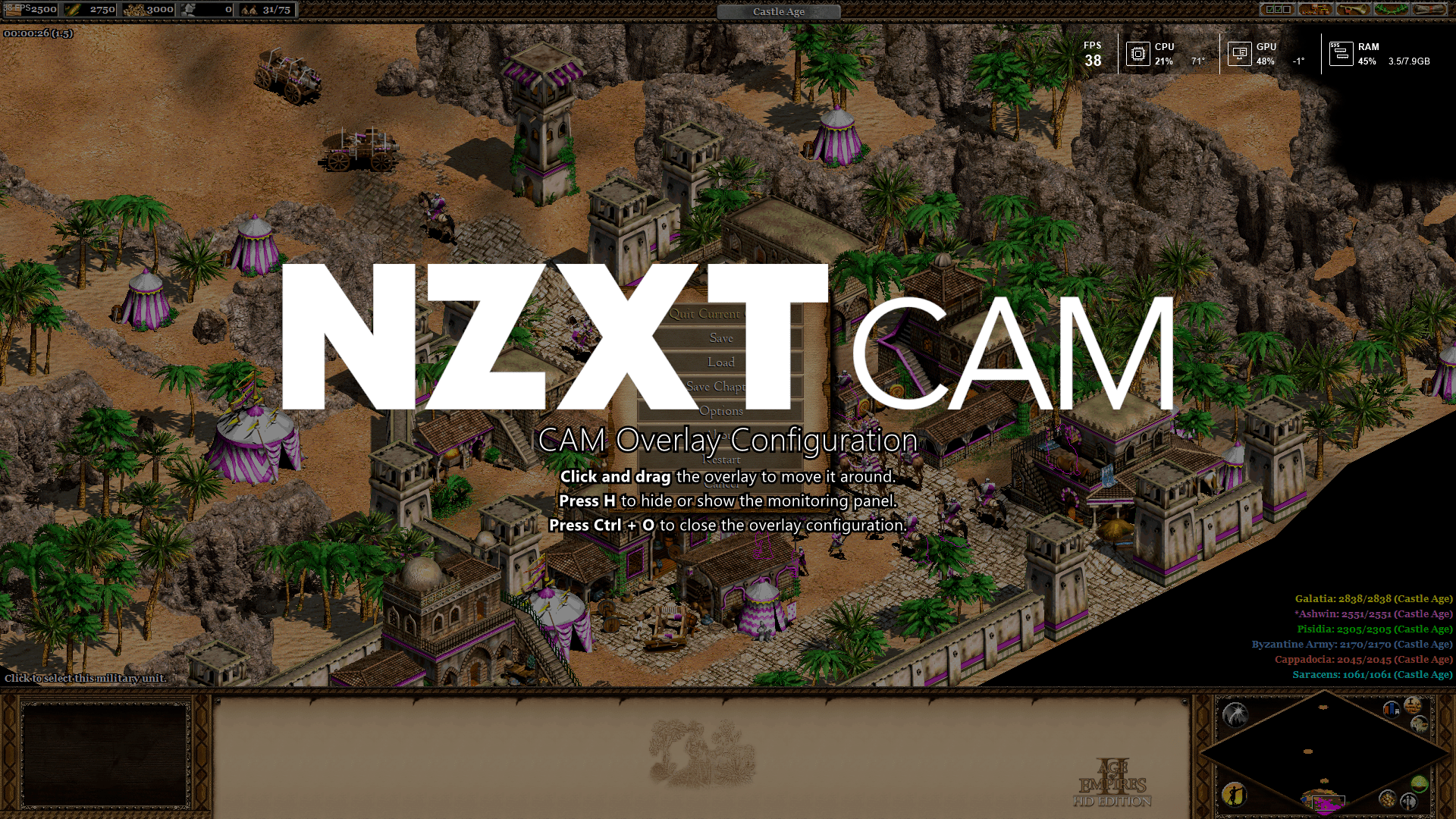 Note: I'm aware NZXT CAM had a bad history where telemetry was non-optional, and users needed an account to use it. These issues were fixed 2 years ago. I'm not defending the program. What I'm trying to say is that CAM works offline, and can be used in guest mode even if you're online. I monitored it with Glasswire and Sterjo Task Manager and found that while it did connect to the NZXT server, it only does so when you're actually using the program. I closed and reopened the program several times and the network usage was higher when CAM was started.

There is a splash screen that appears when you run the program manually, this is probably when it communicates with the servers, which isn't surprising considering that it has an account based system for registered users.  My other theory is that it is anonymously storing the data about your gameplay timeline, something that registered users may find useful. Anyway you can and should disable the anonymous telemetry option from the Settings > Privacy screen. And maybe disable the application from the Firewall too if you're concerned.

NZXT CAM has a light memory footprint, which is ideal when you're playing intensive games. Programs like these can not only help you monitor your computer's performance while gaming, but also for understanding the impact of each advanced graphics settings.

Ashwin has been blogging since 2012 and is known among his friends as the go to tech geek. He is a self-proclaimed Android expert, a PS4 and PC Gamer, a Firefox fanboy, a Nintendo aficionado, and an iOS tinkerer
View all posts by Ashwin →
Previous Post: « FocusOn Image Viewer is a freeware photo viewer that has a built-in editor
Next Post: FastStone Image Viewer 7.5 adds support for audio playback and a dark theme »