Microsoft released Windows 10 version 1909 in November 2019; the new major version of Windows 10 was just a minor update that did not introduce many new features or changes to the system.

Windows 10 devices that run older versions of the operating system can be upgraded to the new version. While there are some stopper bugs and devices that are held back, as usual, most devices are eligible for the update to Windows 10 version 1909.

Microsoft revealed earlier this month that it won't release smaller updates like Windows 10 version 1909 anytime soon. The company revealed that it used the update to test the functionality but that it had no plans to make the 2009 update a minor update as well.

Another major change that happened recently was the termination of the Skip Ahead Insider Ring. Microsoft dropped it entirely from the program which meant that Fast, Slow and Release preview rings are all that is left. 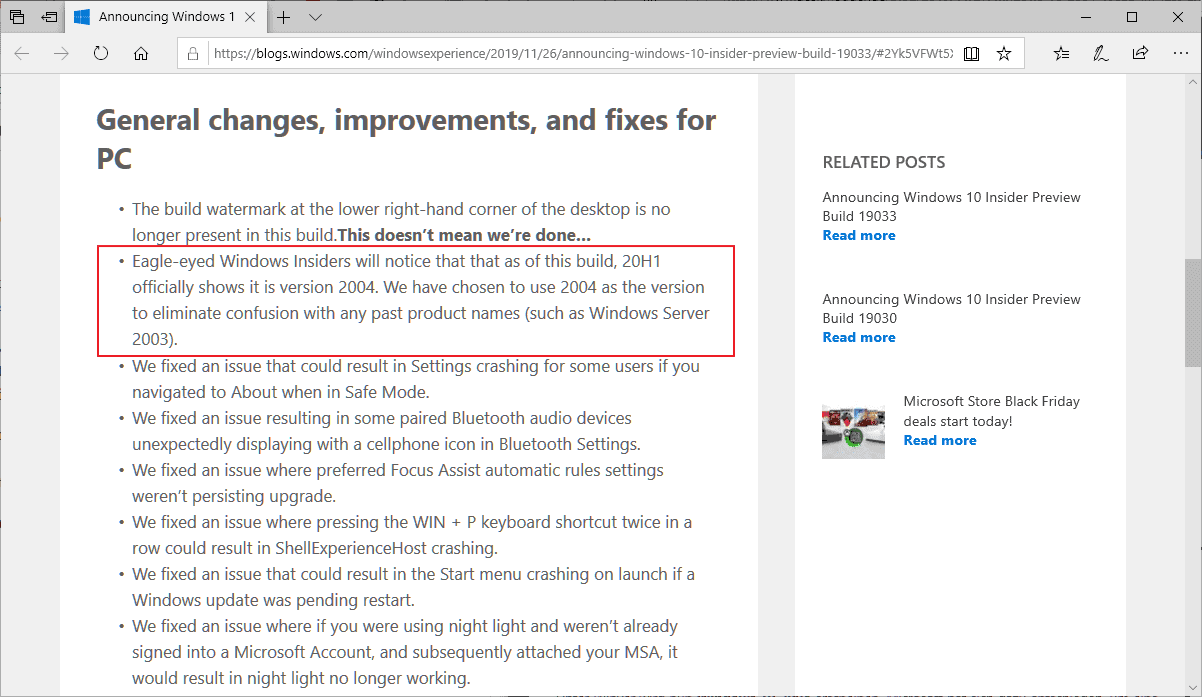 What about 2020 then and Windows 10? Microsoft published a new Windows 10 Insider Preview version, build 19033, on November 26, 2019 and announced the release on the official Windows Experience blog.

Brandon LeBlanc, a Windows Insider Program Senior Program Manager, revealed the version of the next feature update for Windows 10 in the blog post.

Eagle-eyed Windows Insiders will notice that that as of this build, 20H1 officially shows it is version 2004. We have chosen to use 2004 as the version to eliminate confusion with any past product names (such as Windows Server 2003).

To avoid confusion with Windows Server 2003, Microsoft made the decision to make Windows 10 version 2004 the next feature update for the operating system. Obviously, that may still be confusing considering that users could interpret the version as year.

Build 2004 has been pushed to the Fast and Slow ring. Fast ring systems will receive Windows 10 20H2 soon; the second feature update for Windows 10 of 2020 will then be tested by participants who run Fast Ring devices.

Microsoft plans to release two major feature updates for Windows 10 in 2020. Windows 10 2004 will be the first major release in 2020 and it will introduce new features and make changes to the operating system. Little is known about the second feature update of 2020 as public testing has not yet begun.

Now You: Which version of Windows 10 do you run, if any? (via Deskmodder)

Martin Brinkmann is a journalist from Germany who founded Ghacks Technology News Back in 2005. He is passionate about all things tech and knows the Internet and computers like the back of his hand. You can follow Martin on Facebook or Twitter
View all posts by Martin Brinkmann →
Previous Post: « Split or Merge PDFs with PDFsam Basic, an open source program for Windows, Linux and macOS
Next Post: Criptext is a free encrypted email service with open source apps for Windows, Linux, macOS, Android and iOS »