Google shuts down its Cloud Print service after 10-year Beta

Google revealed plans to shut down Cloud Print, a cloud-based printing solution, at the end of 2020 permanently.

The company launched Cloud Print back in 2010 as a solution to print from any Internet connected device to compatible printers. The main benefit of the solution was that users did not have to install printer drivers on their client devices and that devices did not need to be in the same local network as the printer. The solution enabled printing on devices without official support from the printer's manufacturer or drivers for that particular device.

On Windows users could install the Google Cloud Printer application to add cloud printing functionality to the operating system.

One of the downsides of Cloud Print was that documents had to be transferred to Google. Google stated that it kept a copy of the document only for as long as needed to complete the print job. 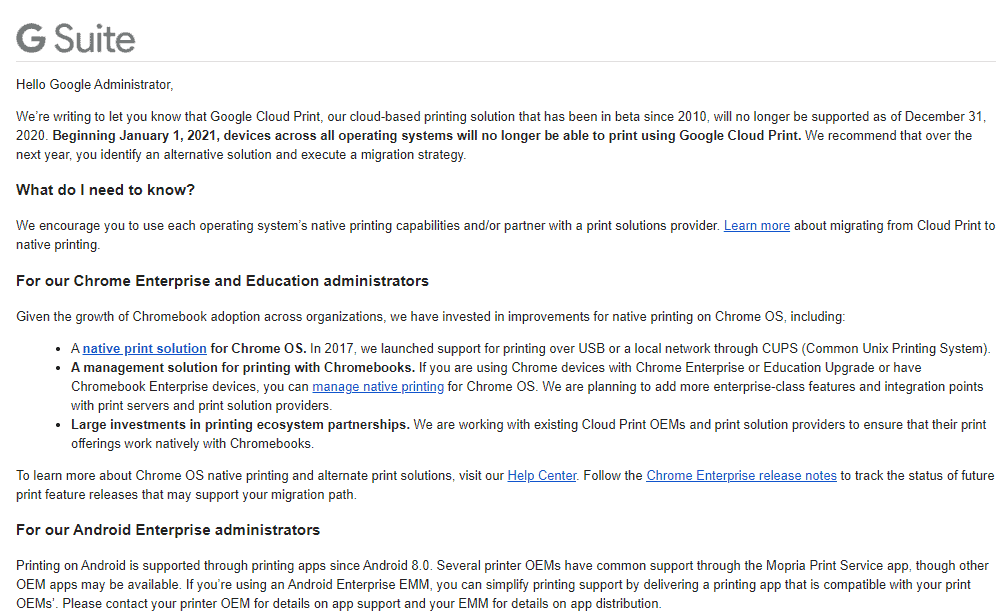 A support page on the Google website informs users about the upcoming termination of Cloud Print. According to the information on the page, Cloud Print will continue to function until December 31, 2020. Google will shut down the service on January 1, 2021 and that means that "devices across all operating systems will no longer be able to print using Google Cloud Print".

Google lists a number of options on the support page, aimed specifically at Chrome OS administrators and users. The company recommends native printing which it says has improved significantly. Among the options are printing over USB or a local network through Common Unix Printing System, or Enterprise and Education specific native printing options.

Affected users may be able to use Google Cloud Print alternatives such as Free Mobility Print for Android.

It is not uncommon for Google to shut down products and the sheer reach of the company means that shutdowns affect a large number of customers. Google users affected by shutdowns may be more cautious when it comes to using new Google products (such as Stadia).  The decision to shut down Google Print will make things more complicated for some.

Now You: Have you used Cloud Print? What is your take on the shutdown?

Martin Brinkmann is a journalist from Germany who founded Ghacks Technology News Back in 2005. He is passionate about all things tech and knows the Internet and computers like the back of his hand. You can follow Martin on Facebook or Twitter
View all posts by Martin Brinkmann →
Previous Post: « Google Password audits all your passwords to reveal weak, reused or compromised passwords
Next Post: Google Search displays icons now on results pages »